Pop Brixton, the “creative hub” built entirely from shipping containers, will open on Friday May 29.

The site on Brixton Station Road will provide units for restaurants and retailers as well as workspaces for local business, start-ups and “a community event space’.

Pop Brixton is a partnership between Lambeth council, which has provided the land for free, and Carl Turner Architects (who have teamed up with developers The Collective), to deliver the scheme which will be there until at least October 2017.

Around a third of the venues at Pop Brixton will be food and drink establishments, including Zoe’s Ghana Kitchen, Mama’s Jerk, Baba G Bhangra Burgers, Miss P’s Barbecue and Koi Ramen.

It will also be home to a local radio station and Impact Hub Brixton. Around 85 per cent of business owners in the development are Lambeth residents and 58 per cent from Brixton.

The project has had a controversial past: originally the development was to be called grow:Brixton, a partnership between Carl Turner Architects and the Edible Bus Stop, which creates design-led growing spaces, who won the competition to turn the former ice rink into a “green oasis” for local people.

grow:Brixton was granted planning permission to use the land but last December, after “a number of difficulties” resulted in Edible Bus Stop leaving, the project became Pop:Brixton, with more focus on enterprise.

The development has also been criticised for its high rents with commercial rents ranging from £800 to £2,500 a month, a high level for small businesses.

Philippe Castaing from Pop Brixton says this is to subsidise the start-ups, who will be charged a lot less, and the community programmes they hold. 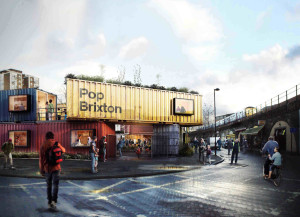 Ten units have been made available at 20-50 per cent of the market rates.

Cllr Jack Hopkins, Cabinet member for Jobs and Growth, said: “I’m excited… It’s something totally new for Lambeth and I’d encourage everyone to come down and have a look themselves – because not only will people have a great time, they’ll also be supporting the local economy and helping create new jobs.”