The Brixton Blog arts team met PINS, the South London-based artist organising the artwork going up on the shutters of Brixton businesses to protest Network Rail’s plans to evict them, as well as creating one iconic piece himself (below).

Croydon-based artist PINS has been painting the shutters of A & C Continental Deli for the last two years. When owner Jose Cardoso told him about the proposed Network Rail evictions, he immediately sprang into action, contacting friends and other artists to support the campaign to stop the evictions using “the power of art”.

“It was a no-brainer,” he said, “it gives the artists exposure and it gives the shop owners exposure – and it’s all under one cause.” His idea was to get skilled street artists, both upcoming locals and “old-school graffiti-heads”, to paint the shutters to publicise the campaign and show solidarity with the shops, some of which have been there for decades. See our gallery of the work so far below.

And it’s working. The artwork has been widely shared on Twitter with the hashtag #SaveBrixtonArches and been covered in the Evening Standard and on local TV network London Live. “I can see this developing into a  bigger thing,” says PINS, who has his spray cans out for Brixton again today.

An initial challenge was actually convincing the shop owners to let the artists paint their shutters. But as the project gains momentum, more and more are coming on board and are now lining up to have their shutters painted. PINS has been contacted by over 50 artists who want to get involved. 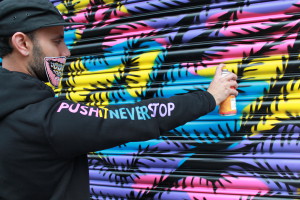 “Street art is a growing subculture,” he says, “it has the power to inspire and engage with the public. Brixton is a mix of different people and the art will touch them all in a different way.”

The hope is that the artwork will highlight the individuality of these important shops at the heart of Brixton, in rebellion of what many see as Network Rail’s attempts to encourage more lucrative tenants such as chain shops and restaurants.

“It’s just going to become sterile,” says PINS, “Faceless organisations just want to take people’s money and it’ll be a fake society – it should be about human interaction.”

This is the first time PINS has used his art to make a political point but it’s given him a taste for campaigning. He’s worked as a youth worker for eight years, and now he wants to do more to make sure people properly respect and pay artists. He’ll also be at the Reclaim Brixton march on 25th April so look out for him there!

SAVE OUR SHOPS: businesses dismayed by Network Rail’s latest letter