The premiere of The Cutting of the Cloth by Michael Hastings has been a long time coming. The Brixton writer, who died in 2011, wrote the play 50 years ago but kept it in a drawer. It was never produced.

But now the show has at last reached the stage, at the Southwark Playhouse, where it will run until Saturday April 4.

Hastings’ play a semi-autobiographical account of his time as a tailoring apprentice in Savile Row in the 1950s when he lived in Brixton with his mother in a council flat in Crownstone Road.

The plot is straightforward: a young apprentice begins work at a tailors where two master craftsmen are at odds over the future of the industry. It is simple stuff, transformed by Hastings’ subtlety and wit into a play that is truly compelling.

In particular, The Cutting of the Cloth provides a vivid depiction of the clash between old and new technology – in this case a sewing machine. The attention to detail on the set is riveting – it is impossible not to want to stop and take a closer look as you pass by the stage at the end of the production.

Maurice (James El-Sharawy) is clearing a version of Hastings: the young apprentice uses any free time he has to write. During his apprenticeship at Kilgours, Hastings wrote his first professionally produced play Don’t Destroy Me, set in 1950s Brixton.

The play is produced by Two’s Company Theatre Company, directed by Tricia Thorns and stars Andy de la Tour as Spijak, the craftsman who believes nothing can beat a hand-sewn suit while he battles Paul Rider’s Eric who is ploughing ahead with his new technology, making more suits – and much more money.

All his life Hastings was inspired by Brixton: Gloo Joo his West End hit  Evening Standard Comedy Award is set in Brixton, as was his first novel The Game and his volume of poetry Love Me Lambeth is largely based on his youth in the area. The Cutting of the Cloth is a perfect addition to this remarkable body of work. 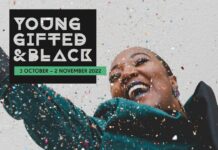