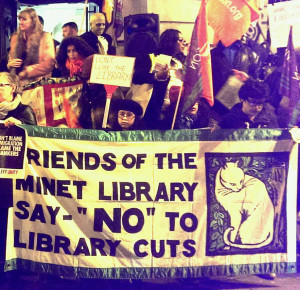 Friends of Lambeth’s libraries and parks, including those in Brixton, have criticised Lambeth council for its proposals to reduce cultural services.

They have branded its Culture 2020 consultation “pointless” and said that the council do not understand the seriousness of what they are doing.

The proposals include the sale of Waterloo and Minet Libraries, having community groups take over running three others, cuts to the remaining five libraries, as well as cuts to park budgets and having friends’ groups or communities take over the running of the borough’s green spaces as “charitable trusts”.

Friends of Lambeth Libraries said it is “appalled” by the proposals and that it has “no doubt more sensible savings could be made.”

Bill Linskey from Brixton Society said the sale of Minet Library, in Knatchbull Road, Brixton, was particularly worrying because it is home to the Lambeth Archives.

He told The Bugle “Selling Minet not only robs the community of their local lending library but it threatens the Archives. They are the history and memory of the borough, and one of the best collections in London.

“The council have proposed they go to Brixton Library but there isn’t enough room and the space there is isn’t suitable anyway. The government cuts are obviously a huge problem but some of these plans, like selling Minet, seem like panic measures… and they are doing things they can’t undo.”

Colette Thomas, chair of Lambeth Green Parks and Spaces Forum, is no more positive about Culture 2020.

“Asking a ‘friends group’ – a role of a council to manage major services, how can that work?”

She, like others (see our comment on page 9) also criticised the way the council had gone about its consultation. Thomas feels the council has already made its decision and the consultation process is just a formality.

“We’re going to consultations and meetings and yet we always get the same answers.”

“How much did they expect to get from the public anyway? You’ve got sports, arts, parks, a huge amount of documents. People will get lost in it, they won’t respond to it and in my opinion that’s just how the council like it.”

Cllr Jane Edbrooke, Cabinet Member for Neighbourhoods, said: “The problem is if you deal with each issue individually you will find that everyone loves parks, everyone loves sports, everyone loves libraries and we wouldn’t actually know where the public’s priorities are. By putting it all together like this it shows we’re having to make choices. The fact is that the overall budget is being reduced by £4 million pounds.

“We are absolutely listening to everyone. These cuts are heartbreaking. If someone has a better idea, I assure you I’m not precious and I will investigate.

“The consultation is open until April 24 and we really want to make sure people get involved and tell us their views and ideas.”

Have your say on the cultural services proposals by completing a questionnaire at lambeth.gov.uk or pick one up from a local library.