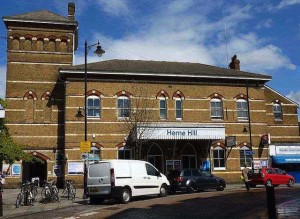 A number of shops next to Herne Hill Station on Railton Road are facing an uncertain future as Network Rail plans a refurbishment of its property in the area.

The situation is similar to that of many Brixton businesses, who have been told they need vacate their premises later this year for the refurbishment of the arches in Atlantic Road and Brixton Station Road.

Just like in Brixton, the Herne Hill tenants have been offered no guarantee they will be able to return on their current contracts.

The shops facing eviction include the butcher, a grocers and the last bakery in the area to produce on the premises.

The economy of the area is still recovering after the flood caused by a burst water main in 2013.

Tenants have not yet received notice to vacate but the refurbishment is set to begin this summer and to be completed next year.

Network Rail said: “There’s six units at 313-329 Railton Road in Herne Hill that are in a poor condition and we want to create fit for purpose retail units to capitalise on the good work which has been done in pedestrianisation of Railton Road itself.

“Some of our existing tenants may wish to discuss returning to Railton Road and we will be happy to discuss any proposal from them (as at Brixton).  Some may not wish to return and our policy for any new tenants will be to seek small and independent businesses, in keeping with the general area.”

Jim Davidson gets (back) on his bike in aid of hospice