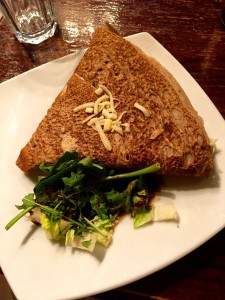 Hands up if you made any New Year’s resolutions in January.

I started 2015 by cutting out gluten for a month. After hearing that a gluten free (GF) diet might ease the more painful symptoms of an annoying condition I’ve lived with since uni, I figured I had nothing to lose. Except maybe money. The “free from” thing isn’t always cheap.

After a month off the cakes, and a serious reduction in pain (which promptly returned when my partner-in-crime and I toasted our month of self-discipline with IPA), I’ve decided to stick with it. On the spectrum of gluten sensitivity, I guess I’m ahead of the kale mafia, but behind the allergic and severely intolerant. When faced with options like craft beer and noodles, I can weigh the strength of the craving against the days of discomfort it’ll cause, like some twisted foodie exercise in masochism.

Brixton turns out to be a pretty good place to eat gluten-free. Honest Burgers famously offers GF buns (and beers), Vozars in Brixton Village allows us to indulge in comfort foods like fish’n’chips, and Federation Coffee offers up savoury fritters so addictive, you’ll forget to pine for their rustic biscuits and baked goods. But that latter offering aside, there are surprisingly few GF breakfast and brunch options in and around the area. Sure, you can order the omelette at Duck Egg Café, or request a breadless egg dish at Snugg, but you’ll struggle to find wheat-free replacements for morning treats like pancakes, pastries and parfaits.

Senzala is a notable exception. With its buckwheat galettes, the creperie is a winner for gluten-free brunch, and caters to sweet and savoury tastes alike. Proving that “the simplest answer is often the best,” the basic cheddar and Emmental variation offers enough flavour to knock your socks off. I’ve heard buckwheat described as “assertive,” a polite euphemism for “bitter.” This distinctive taste is toned down somewhat by the nutty Emmental, which also balances out the saltiness of the cheddar. Vinaigrette from an intentionally overdressed cluster of greens seeps into the base of the galette, delivering a hit of fruity acidity that transforms a few creamy bites around the edges into something more complex. It’s safe to say I’m no longer disappointed that the “Canadienne,” a maple syrup- and crispy bacon-filled ode to my home country, has disappeared from the menu.

Still, it’s hard for a Canuck to imagine breakfast without at least a little maple syrup. The obvious answer is WAGFree at Vozar’s French toast, though sadly, this one remains a DIY option. I found the bakery’s golden bloomer more than up for the task; the dense, cake-like texture of the bread actually suited the dish better than some of the non-GF varieties I’ve used in the past. It’s an exceptionally simple dish to put together, inexpensive, and a sure fire hangover cure (or so I’ve been told).

Whisk all of the ingredients together, then soak the bread in the mixture in batches, letting each absorb as much of the egg as possible. The small amount of milk adds creaminess.

Add a knob of butter to a large fry pan over medium-high heat. Place the coated bread in the pan; sprinkle with a little more cinnamon if you wish. When the vanilla becomes fragrant and toast is golden brown on the bottom, flip the slices and turn the heat down slightly. When both sides are evenly cooked, serve with a dusting of cinnamon and/or icing sugar and plenty of maple syrup, plus more for dipping. 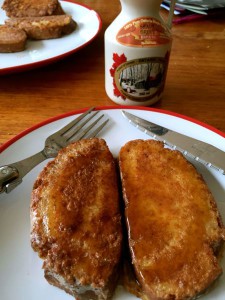 Not to be confused with the chain from across the pond, Brixton Whole Foods is another great resource for home cooked breakfasts. Make ahead options like chia pudding and amaranth porridge are flavoursome, budget-friendly, and packed with enough protein to sort you out for a morning workout. 500g of amaranth comes in at £3.16, while £2.84 will get you 250g of chia seeds.

If none of these options satisfies your sweet tooth, it’s worth checking out the daily offerings at Ms Cupcake. The gluten-free lemon blueberry cupcake may be topped with enough frosting to make your mother weep, but there’s real fruit in the cake. (And after all, who hasn’t indulged in dessert for breakfast at some point?) If you remove the icing, or at least approach the sugary swirl with the caution of a toddler tasting his first ice cream, you’ll appreciate the delicacy of the lemon cake beneath. It’s a subtle flavour, the kind that’s enhanced tenfold by a decent cup of tea, which is why I’d rather save the cupcakes for mid-afternoon. To each his own. 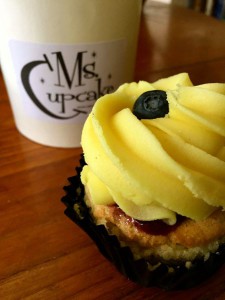 Any dietary change is a learning curve, and I still have a long way to go before the right choices become second nature. But I’m excited to be doing it here in Brixton. I expect that there’s plenty more yet to discover.

Lindsay tweets and Instagrams @lindsburge on both for lots more gluten free moments.