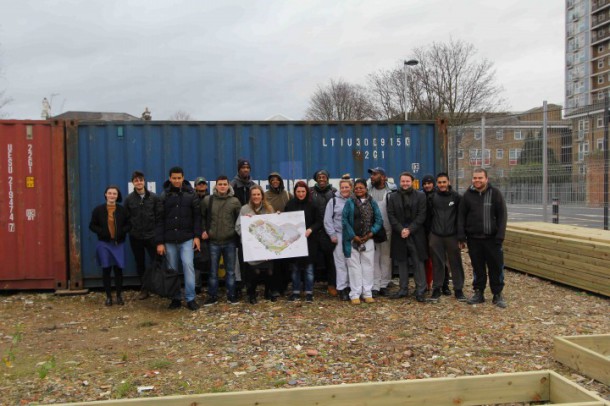 Apprentices from Lambeth College started work on the ‘meanwhile’ space at Pope’s Rd this week, where once the car park and then the ice rink used to be. The project, now called ‘POP Brixton’, has also opened up applications for businesses to operate from shipping container units on the site, after changing hands late last year.

The team behind the Edible Bus Stop left the project, originally called Grow:Brixton, after relations with the architects Carl Turner broke down in autumn 2014. The site has now changed name to POP Brixton and the new team includes Philippe Castaing, founder of Brixton Green, as well as the original architects. Apprentices working on the site are students from the general maintenance course at Lambeth College and will be paid the London Living Wage of £9.15 per hour.

POP Brixton describe themselves as a “new community campus offering event spaces-bars-workshops-mini hotel-food growing-offices-radio-music studio & much more”. They will have control of the site until at least October 2017.

Questions have been raised over whether the council should have consulted locals on the changes to the project, given the emphasis they initially put on public consultations and the fact that the Edible Bus Stop – with a big emphasis on urban growing schemes – were in part voted in by the Lambeth public.

A council spokesperson said: “The project remains largely the same. The Service Level Agreement between Pop Brixton and the council will be the same, focused on the same project objectives, community ethos and employment and training for local people. Food growing and horticultural projects will still be delivered on site in collaboration with schools, local community organisations and residents.”

Mak Gilchrist from the Edible Bus Stop said: “Grow:Brixton is a promising concept, it itself can still work, but the original partnership could no longer function together. Grow:Brixton will live on in other sites and spaces across Brixton and Lambeth. We’ve taken on a new space as part of Loughborough Junction Meanwhile Space project and we are looking forward to getting involved with the local regeneration plans.  We’re keeping our eye for potential sites in and around Brixton to continue the Grow:Brixton concept and create a network of innovative growing spaces, growing both food and enterprise, building on the success of our existing Edible Bus Stop projects elsewhere in the Borough.”

POP Brixton has now put a call out for applications for retailers and food businesses to operate on the site in 20′ and 40′ containers. Each container will have internet access, power points, insulated walls and double glazed windows.

Philippe Castaing was keen to point out the emphasis on training and employment at the new space: “We will do a lot of training on the site and access to employment. When I joined they were going to ask the tenants to do the training which is all well on paper but you can’t ask a start-up to look after the business and look after a training programme. We will have different sets of people on site – one will be all our partner organisations such as Lambeth College and the Brixton Pound, who will devise and deliver training programmes. The tenants will give an hour a week of their skills to the training programme.”

Philippe Castaing also told the Brixton Blog in December that they hope to run a hotel on the site with up to 10-12 rooms. “A hotel style would bring an extra 4000 people on site every year which is enormous for the Brixton economy. It’s an exciting place to stay and people will talk about it. We are already set up with the Brixton Pound so we will have a gift hamper when the guests come, from local shops. There would be 7-8 rooms maybe but because of the flexibility we could easily add more elsewhere on the site so we might end up having 10-12 rooms.”

However, a council spokesperson was keen to emphasise that no decisions have been made yet about the hotel. “Any such proposal would be considered on its merits, including the potential to bring additional visitors to the area and extra spend to the local economy. It could also bring opportunities for training and employment.”

The costs for the project are being met by POP Brixton, although the council met the costs of submitting the planning application and for the banners attached the fence on the site, as well as providing the land at a peppercorn rent. Philippe told the Blog: “To set up the site and run it for the length of time we have it for is about a million pounds. So we have to take in rent £30-35k a month just to break even. It’s all private investment. Carl has put a big chunk of money in there and we are getting more money from other investors.”

The project was granted permission in September 2014 but lost three months due to the problems between Carl Turner and Edible Bus Stop.

Have your say on the plans for Brixton Market

Out for a duck