There are picket lines in Brixton and Clapham this morning as Lambeth College staff enter the third day of an indefinite strike over new contracts.

In a ballot, 89 per cent of members of the University College Union (UCU) backed the call for industrial action against changed working conditions and benefits for all staff.

Picket lines outside campuses in Brixton Hill, Clapham Common and Vauxhall have been manned from 7.30am every day.

The contracts, brought in by the college from April for new staff only, will mean they work longer hours, will work during the traditional college holidays, and will have less sick pay.

UCU representative Mandy Little said: “There has been massive support for the strike from both staff and students, and we’ve closed down whole departments.

“Teaching will suffer massively under these contracts. They are awful and simply lead to a division in the workforce.

“How can you have a situation where some people are getting different benefits and holidays to someone else doing the same job?”

Union representatives blame principal Mark Silverman for the changes, saying that they will continue to strike until the new contracts are withdrawn.

But Silverman called the strike “irresponsible and unnecessary and the new terms and said the conditions were the same as “most other colleges”. 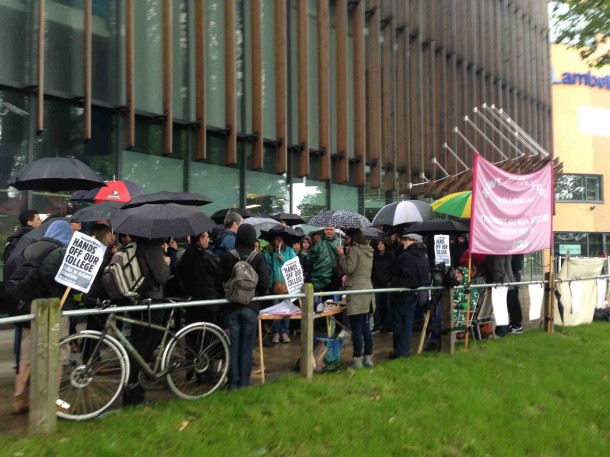 Today (Wednesday) Silverman offered a free lunch to all staff who crossed the picket line, according to the UCU.

Silverman told the Blog: “The new contracts are for new staff and don’t affect existing staff and this is all about ensuring that Lambeth College is fit for the future.

“In the last two years the college has seen a remarkable turn around. When I came here it was the week after we failed an Ofsted inspection . Now our applications are on the up and we’ve opened new provision in hospitality, catering and motor vehicles.

“It’s unfortunate that, in the journey we’re on, UCU have been blocking progress and change along the way.”

Silverman added that funding problems were out of his control – as the Government has cut adult education funding by 15 per cent.

He said: “The college is open for business, most of our staff are in work and most of our classes are running. All exams are taking place. I’m always open to dialogue.” But he added: “The new contract is not up for discussion.”