The well-known Brixton record shop owner Blacker Dread has been jailed for two and a half years for money laundering.

Blacker, real name Steve Burnett-Martin, 55, of Gipsy Hill, received £230,411 in fraudulent payments to his Coldharbour Lane record store as part of a £700,000 scam.

A sign in Blacker Dread’s store today, which was closed with black bags taped to the windows, reads: “Oops…”  Dread is a founder of the Brixton Splash festival and his record shop is a legendary part of Brixton and its history. According to Companies House records, Blacker Dread resigned a board member of Splash in March this year. 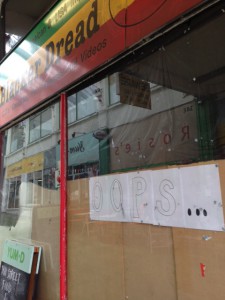 The money was stolen from Sutton firm IMCD Ltd by former employee Lorna Martin, of Selhurst Road, South Norwood and paid into the accounts of Burnett-Martin, Martin herself and four other accomplices between September 2011 and August 2012.

All six were convicted of money laundering on May 26, after a month-long trial. They were sentenced at Croydon Crown Court on Friday. Lorna Martin was also found guilty of theft.

*EDIT:  This article was amended at 4.40pm on June 23 to make it clear the Steve Burnett-Martin stood down from the board of Brixton Splash last year.