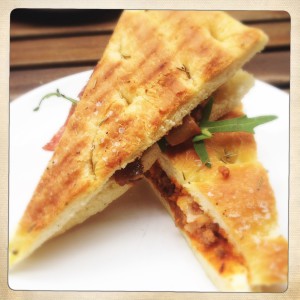 In today’s modern culture, eating lunch properly, sat down at a table and not a computer, is considered quite impractical – a decadent luxury if anything, especially during the working week. We are now forced to eat quickly and efficiently, and the food industry has responded, giving rise to ubiquitous shops selling a seemingly never-ending supply of boxed bready triangles. The process of eating lunch has become so functional that taste and quality often lose the battle to speed and practicality. It begs the question: is it possible to eat a decent lunch cheaply and quickly, but still allowing oneself a short half an hour of a break away from the glow of an Excel spreadsheet?

The answer is in a relatively new addition to Brixton Village: Focaccia. Taking up residency where the former Bellantoni’s restaurant once stood, the small shopfront serves a mix of sandwiches from slices of homemade focaccia, along with soups and salads, using quality ingredients in simple fashion, allowing freshness and flavour to be the order of the day. What sets it apart from many of the other lunchtime offerings around our little hamlet is the speed in which the food is served. Eating quickly but feeling unrushed is a subtle and nuanced achievement.

Focaccia has a variety of daily specials. On one particular day, a peppery rocket salad came with fresh tomatoes, mozzarella and Parma ham, and was simply dressed with a bit of extra virgin olive oil. Although I’d have preferred a riper tomato and buffalo mozzarella over cow’s, the Parma ham was salty enough to cut through the cheese and the ingredients were lovely and fresh. Another day saw cauliflower, spinach and Parmesan soup, which was a revelation, almost making me wish it were winter again. The soup was richly flavoured and warming to the core; the Parmesan lifting it with a creamy sharpness.

On its own, the eponymous focaccia is a yeasty, moreish accompaniment to the soups and salads; its salty top flirting nicely with an underlying taste of verdant olive oil. As a toasted sandwich, it becomes something more. The Forte, an Italian meatball sandwich made from pork and beef with a touch of Parmesan, is the stuff upon which nations should be built. The rich, meaty sauce soaked perfectly into the bread, and with the crunch of the crust, it was peasant food taken to the next level. The Milano, with its promise of scamorza (smoked cheese), caponata and salami, was tantalising. The scamorza is also made with cow’s milk, but unfortunately became rubbery as the toasted sandwich began to cool. The smoky flavour of the scamorza worked well with the salami, but prone to pedantry, I should mention that caponata is normally prepared with slow-cooked aubergines, peppers, celery, capers, herbs and spices. Focaccia’s version was really just chopped and cooked aubergines, lacking any of the vinegary sharpness the dish should normally exhibit. That said, although it was a sandwich that paled to the Forte, it was decent nevertheless.

The entire meal lasted 30 minutes, yet with the hustle and bustle of Brixton Village, the leisurely pastime of people-watching made it feel much longer. And so lunch is reclaimed once again in Brixton. That said if your spreadsheets are calling, takeaway is still an option. After all, Rome wasn’t built in a day…

Lunch for two, no drinks, including service £18

28 June, 2012
We use cookies to ensure that we give you the best experience on our website. If you continue to use this site we will assume that you are happy with it.OKPrivacy policy