The London Labour Party has blocked a Lambeth council candidate from standing for election in May. 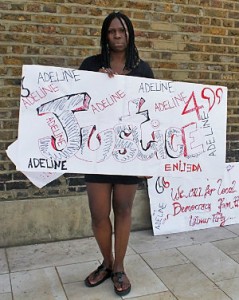 Adeline Aina, left, has been told she cannot stand as the party’s candidate in the local elections because of “unanswered questions” about her role in a tenant management organisation.

A statement from the London Labour Party said the decision to stop her from standing for office was “the only realistic outcome in the interests of both Ms Aina and the Labour Party” because of “serious questions that could not be resolved at this time.” The questions relate to an investigation into the Patmos Area Community Conservation Association (PACCA) Tenants Management Organisation, of which Aina is estate director and board secretary, the party said.

Aina has been at the centre of a row with the local Labour party since last summer.  In July she and a group of supporters staged a protest on Windrush Square after the local party called her in for a hearing.

She had beaten the senior councillor Pete Robbins by one vote to win a place as a council candidate for the Larkhall ward.

At the time Simon Woolley, director of the equality campaign group Operation Black Vote, said in an article on the OBV website: “The local party should be warned against this shocking witch hunt.”

But council leader Lib Peck responded that Aina had been called in for questions because the party had to “make sure that council candidates selected are of the upmost integrity and have the ability to hold such an important local office.”

Lambeth council should “do more, not less” in consulting the public...