The Effort Collective is a group of DIY artists who make attention-grabbing and often subversive art on a tiny budget, holding everything from film screenings to art installations to gigs. Effort Collective member Vanessa writes about the group’s struggles to find spaces for their projects and the support they’ve had from the Brixton community. 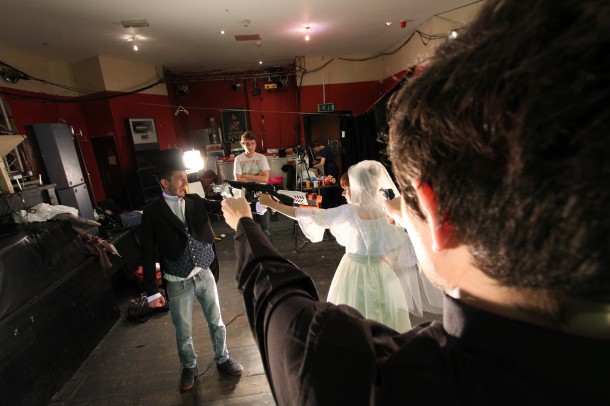 The Effort Collective has worked out of empty spaces all over London. To us empty spaces don’t just mean abandoned buildings; they can be the backroom of a pub before it opens or the lull before lunch in a restaurant. Many businesses have spaces that could give artists the opportunity to develop, though they may not be aware of it. Working with local businesses has made us feel part of the local community and we’ve had a great time filming promos for our events in Brixton.

Empty spaces have been vital to our artistic practice. Most London-based artists will tell you that lack of space is their biggest obstacle. One of our first London projects was a play called Shoebox which was rehearsed in an abandoned warehouse called in Elephant & Castle where a group of activists lived with permission from the owner. Despite the almost freezing temperatures, we had the space to create a devised show which was performed in three different London theatres.

Support from the Brixton community began with our partnership with Music Bar on Brixton Hill, now a Tesco. The landlord, CK Flash, gave us free rein over the pub’s back room during the daytime. Over two years the room hosted theatre rehearsals, auditions, band rehearsals, film shoots and set construction. Our local base made it easy for us to host events at The Windmill around the corner. Local businesses (notably The Crown and Anchor) have also allowed us to use their premises as locations for film shoots.

Sadly, many abandoned buildings and historical landmarks are now being taken over by chain restaurants, supermarkets, and kitschy, aspirational conversions. But Brixton has great potential as a hub of artistic creativity, particularly given how community-minded we’ve found its residents and businesses.There’s also a fight to conserve and revive community buildings, so we are very much looking forward to the launch of new Brixton landmarks, such as the Black Cultural Archives, and new community and arts spaces.

This article is part of a feature on Transforming Empty Space in Brixton.