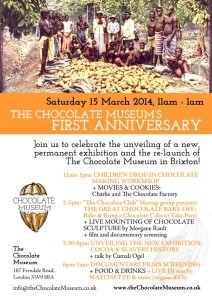 Over quite possibly the best hot chocolate ever tasted, Isabelle Alaya, chocolate artisan founder of The Chocolate Museum, spills the (cocoa) beans about Brixton’s hidden treasure.

“It seems so logical for me to be in Brixton!” exclaims Isabelle with a charming French emphasis on the ‘R’, when asked why she chose Brixton as location for her Chocolate Museum a year ago. “I wanted diversity and I was so lucky to find this location – it’s great!”

She adds enthusiastically, “There is a lot of activity in Brixton and it’s also the perfect cross-over place of the consuming and the producing countries of chocolate. For the black history part of chocolate it’s important that that we are in Brixton.”

This year, Isabelle wants to increase the Chocolate Museum’s presence and to attract more visitors. She hopes to be present with stalls at various events such as the Brixton Splash and the Brixton Bake-Off. “We want to see the general public in here, all ages, she explains.

Isabelle puts two cups of sweet, rich hot chocolate on a table and sits down underneath a joyous collection of vintage French and Belgian chocolate ads displayed on the wall. “I already had these ads from when I was young, so I think I was predestined [to work with chocolate], “she smiles. “Chocolate makes me happy for sure!”

She found her calling quite by chance, a decade ago. “Before I was in chocolate, I travelled a lot. I moved from my home town of Paris to New York where I worked for ten years. I left and went back to France for a year, before I came to London where I decided to learn about and practice making chocolate.”

“In the beginning I had no idea what I was doing”, she laughs.”But, after creating my third batch of chocolate products, I though ‘Ahh, so this is the pattern!”

Isabelle stirs her hot chocolate whilst reminiscing. “I kept going and kept thinking of the next flavour. You just have to practise and practice to understand what you are about.”

After two years of training, Isabelle set up her own chocolate manufacturing site and café, Melange, in Peckham. She now has her own 15-strong range of Melange chocolate bars with tantalising flavour combinations such as lemon/basil, raspberry/rosemary, coriander/grapefruit and cardamom/clove.

On Saturday, the Chocolate Museum celebrates its first anniversary with a suitably chocolate-themed party. Good news is that everyone is welcome! The morning will see various children’s activities, later there is a chocolate cake bake-off, followed by a chocolate sculpture assembled by one of Isabelle’s chocolate students. The day will also hopefully see the unveiling of the ‘Chocolate Through the Times’ tasting exhibition downstairs. Celebrations culminate with an evening of afro beat and reggae to “keep a bit of the controversial part of chocolate.”

“On our launch day last year, 300 people came including chocolate professionals so we are hoping for the same this time around,” says Isabelle.

The museum may not be in everyone’s address books yet, but is clearly benefitting from being the only of its kind in London. Chocolate now forms part of the curriculum so schools from across the city are keen visitors to Brixton’s little chocolate heaven.

“Great minds think alike!” laughs Isabelle. “Suddenly all schools are calling and and want to visit because teachers use chocolate to teach kids about geography, history and science!”

Despite occupying a relatively small space, the museum has two clearly defined functions; upstairs is for making your own chocolate whilst downstairs is all about the history and tasting of chocolate.

The exhibition focuses on the British involvement in chocolate making. “British chocolate history is amazing!” raves Isabelle. “For instance, Cadbury’s legacy is important; it was first to industrialise chocolate manufacturing and making it affordable for the masses. Otherwise it was reserved for the elite only.” She continues,” Britain was also the first to introduce sugar into chocolates. A century ago, sugar was considered pure luxury. Imagine the excitement when they started adding sugar to chocolate, they were all high on chocolate due to the rush of the sugar that they normally would have had maybe only once a month!”

When asked what the future holds, Isabelle maintains that she is “not static” and may want to build on her little chocolate empire. ”The museum was my second step, tomorrow I might extend to a [cocoa] farm. That might be the next stage. “

“I am not in this for the money,” she says earnestly. ”I am working with chocolate for the beauty of it. I don’t sell insurance, I make people happy.” Isabelle laughs whilst scooping out the last remnants of melted chocolate from the bottom of her cup. “What’s better than chocolate? This is definitely my shelf in life!”

Linda Quinn - 22 November, 2019 0
Families in Lambeth now have a way to find healthy food when they’re out and about thanks to an award scheme that recognises food...