Rob Harris attends a 12 hour read-a-thon of the works of Brixton’s CLR James. 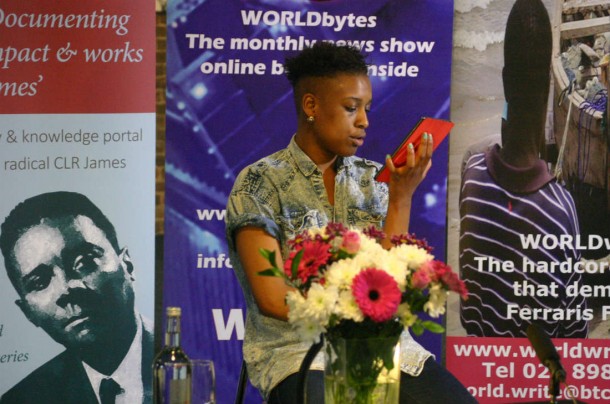 The education charity WORLDwrite doesn’t run marathons, it runs Read-a-thons. On Friday 28th February over 40 volunteer readers gathered at the Museum of London Docklands, and at WORLDwrite’s volunteer centre. They were there for a pioneering 12 hour sponsored read of works by the acclaimed writer and revolutionary CLR James, the inspiring Trinidadian who died in Brixton in 1989.

Live-streamed online across the world, the Read-a-thon raised over £5000 in support of the charity’s multimedia film project Every Cook Can Govern.

From 10am to 10pm, non-stop, CLR James’ powerful writings were brought to life by readers of all ages and backgrounds. From budding journalists, to authors and retired teachers, everyone who took part helped convey James’ message: that history is not something that just happens to us – it is something we can shape for ourselves.

From aspiring broadcaster Sapphire Mcintosh we heard a formidable argument written by James in the early 1930s. The argument refuted the colonial powers’ claims that West Indians were unable to govern themselves. It was amazing to think that CLR James was writing decades before these countries fought for independence.

On the eve of ‘12 years a slave’ receiving an Oscar for best film, many chose to read from CLR James’ classic book The Black Jacobins detailing the Haitian slave uprising over 200 years ago.

As the Read-a-thon WORLDwrite Director Ceri Dingle pointed out:  “CLR James brought a different side of the slavery story to light. He helped us understand that slaves were not just objects of pity and despite the horrors meted out to them. Inspired by the ideas of the French Revolution, in Haiti they successfully overthrew their colonial masters and freed themselves. We hope more people will be inspired to read this exceptional book.”

Writer Jeff Bannis, counsellor Hazel Carey and lecturer Graham Hope all read from CLR James renowned Beyond a Boundary, about cricket and colonialism. This is regarded by many as the greatest sports book ever written, but it is as political as anything James wrote.

The readings were diverse. We heard children’s stories James wrote for his son, politically-charged love letters, an appraisal of Ghanaian independence leader Kwame Nkrumah, articles on black power and cultural studies, Moby Dick, the Russian Revolution, Marcus Garvey, James’ opposition to the Second World War, and much more besides.

By the close at 10pm, the volunteer crew and the readers were exhausted but had achieved their aim. They had raised funds towards the completion of their project, and in the process encouraged others to tune in and (hopefully) pick up a copy of one of CLR James’ inspiring works.

Britain’s first Black pop star to be honoured in Brixton