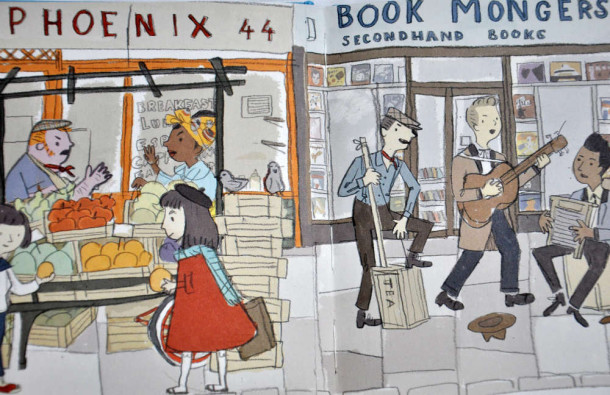 Our Features Editor meets the creators of the just published children’s book ‘A Possum’s Tail’. They show him there’s plenty of Brixton in the London they’ve created for kids…

Sam is only young. Yet he’s walking unaccompanied, dragging his wooden dog (on wheels) through the bustling streets of a quintessential London. As he heads to the zoo, he passes pubs, markets, flat caps and bowler hats.

But Sam’s London will be much more familiar to Brixtonites than most. That’s because the character’s creators are both local.

In fact, two of the Bugle’s favourite Coldharbour Lane haunts, Phoenix Café and Bookmongers, feature in the book. Some of you might even recognise the corner of Josephine Avenue and Leander Road on the first page.

Alex Barrow, the book’s illustrator, says his visual representation was of his ‘dream London’. You only need to look at the clothes to appreciate this vision (as well as his taste for 1940s fashion).

As little Sam returns from the zoo though, he fails to notice the cute possums that have attached themselves to his toy dog’s tail. So there is chaos as Sam and his entourage retrace their steps back home.

It’s a cute story. My daughter loves it. And, bored of reading her the same old books with liftable flaps, so do I. I ask the books creators to tell me a little about it how it came about.

Alex explains that in the process of finding a publisher, there were, of course, a few rejections.

“It’s hard dealing with publisher’s because you’re constantly having to revise your vision. In fact, Gabby and I had our dream version of the book filed away safe…” he says. “Then we found Tate. And they went with this dream version. We couldn’t believe it.”

You’ll meet Alex in the book. Look out for him outside the Barrow News stall playing the accordion. In fact, with Alex in front of me I realise this is a good likeness (he also plays in local band, Severed Limb).

You’ll also meet Gabby, the poet. She’s enjoying the zoo in a yellow dress. It’s Gabby that explains that since its launch, the two of them have been taking the book into schools, including local Corpus Christi. As long time Brixton residents, they are keen to do more school readings in the area.

“It’s quite unusual,” she says about the experience. “To see groups of children enjoying something you’ve created is marvellous.”

Alex adds, “The kids ask you things you never think of, put a different perspective on your work. Simple things like ‘how old is Sam… you know, I’d never even thought of it.”

Gabby, a mother of three herself, also writes scripts for children’s television. She’s worked with the BBC and when I find out she’d been working on Postman Pat, I become a little nervous. It was like meeting a childhood hero.

I ask them about the relationship between writer and illustrator while putting their story together.

“I guess the book came about a little differently from many. It was driven by Alex, something that has been in the back of his mind since finishing art school,” says Gabby. “He showed me some original illustrations, and I knew he was onto something. So I went away and wrote.”

Alex’s original idea was going to be based in Louisiana –hence the possum’s. But living in London, specifically Brixton, had inspired Alex to revisit the idea that had been knocking about for around ten years.

Gabby believes that trust between writer and illustrator is crucial in making a book happen.

“There’s a skill in marrying the illustration to the writing. You don’t want to repeat what’s being told in the image, but equally the writing must leave something to the image,” she says.

The two have been working together at the independent children’s magazine, Okido. So they were familiar with one another’s work. But the author and illustrator are very keen to differentiate their book from what they do at the magazine.

They have another book coming out in September. It’s called ‘London Calls!’ – a reference to The Clash of course. This time though, the book has been done more conventionally, being written by Gabby first, then followed with illustrations by Alex.

You can now buy A Possum’s Tale locally in Tales on Moon Lane (where the book’s launch party was held).