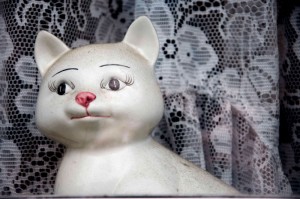 The second part of a series in which our Features Editor, Keith Lewis, meets some of the residents of Cressingham Gardens.

“Good job you didn’t come on a Thursday,” says Rosa. She looks quite small in her floral, winged high back chair. “That’s when I have my groceries delivered. Don’t get down into town much these days.”

A small fan whirs on a side table on her right. There are also two bottles of pop, one finished and the other with a straw in it.

“Used to love going down for a cheap cut of meat,” she continues.

“Especially at Christmas…” Margaret adds, sat back comfortably on the couch.

Margaret lives at number 9, just up the way. She’s been on the estate since she retired 20 odd years ago. As a good friend of Rosa’s she helps out a little. Rosa is immobile, you see.

“Oh yeh, especially Christmas,” says Rosa. “I remember one year my dad coming home. He’d been down to get some lamb for Christmas but he’d stopped for a few drinks.” 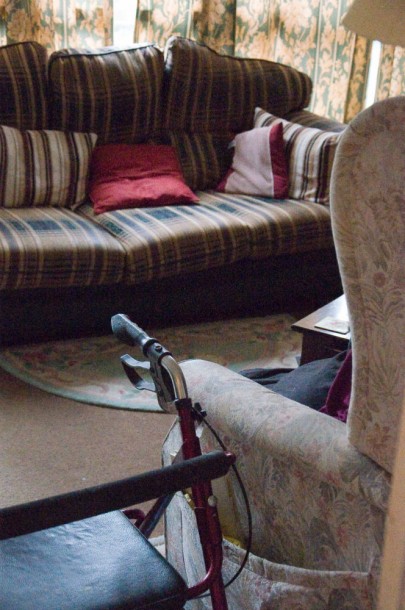 I soon realise that Margaret has heard the story before. She’s taking great pleasure from it.

“Anyhow, he comes back and knocks on the door,” continues Rosa. “He was stood there trying to hide something from my Mum, under his jacket. Quite a bulge, it was.”

“Turns out it was a small pig,” says Rosa. “You could hear it snorting and everything. Not sure what my dad was thinking but Mum didn’t speak to him all over Christmas – he was sent to Coventry.”

“What happened to the pig?” I ask.

“Well, we couldn’t kill it, could we. It lived to a ripe old age out in the back garden. The best of it was, it was quiet as a doormouse until a Sunday morning. That was when the church congregation out back started singing their hymns.”

Rosa nods her head with that humorous, nostalgic disapproval.

“It would snort through the whole thing. Went on for years that did.”

“So what did you have on Christmas day?” I ask. I look at across at Margaret who was now leaning forward.

“Well… at the time, there was a lady down the road who sold chickens. We managed to get a couple off her.” Rosa screws up her face. “But they were full of lice. Chicken was a luxury back then.’ She laughs again. ‘Not those ones though.”

Rosa explains that her and her husband, John, had moved into the place on the day they were handing out the keys to Cressingham. John passed on nine years ago though.

“Forgot his English he did, after the stroke. So we had to speak Greek from then on,” she says. 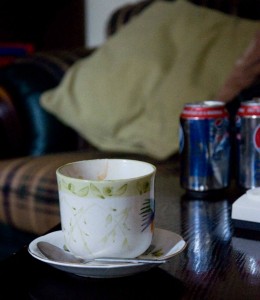 Rosa is half Greek herself. Her other half is Irish, so it goes.

“He had hell of a time during the war. Jumped ship in France and got taken by the Germans. So they sent him off to one of the camps… he was one of the lucky ones though.”

“You could write a book you know,” says Margaret. Then she looks at me. “Rosa’s got a lot of interesting stories to tell.”

“He was a cook, you see,” Rosa continues, spurred on by Margaret’s words. “He had skills, he was useful to them. After the war he got a job at the Marriott. We had some good times in here… funny though, John didn’t like the place when he first saw it.”

“Course, I wouldn’t know what to do if I have to leave here now,” says Rosa.

“I’m hoping it won’t happen for a few years yet,” says Margaret.

Then Rosa looks serious. “There’s no place like Cressingham Gardens for knowing people, you know. I had a bad night a while back, turned my kitchen light on at three in the morning. A man must have seen it and he came across and shouted ‘You alright in there missus?’ I’m all right I said back. ‘Night-night then,’ he said. You know, I had no idea who he was… even to this day.”

She starts to tell Margaret and I about her days around Norwood, during the war.

“A lot got destroyed. I remember a nursing home with everyone in it… it’s full of history around here.”

But Rosa says she didn’t realise how serious it all was at the time.

“You didn’t know when you were young did you. I remember collecting things up, after the bombings. I got hold of a pair of tap dancing shoes once – red with a beautiful little ribbon around them – and I tapped my way around Norwood. They were too small mind. I remember Mum not being too happy about it because of course, they belonged to some poor little girl.” 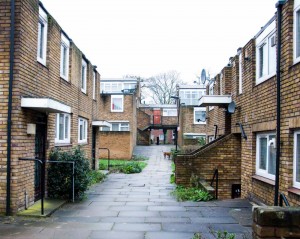 “I remember when all out the back here was gipsy caravan’s,” said Rosa. ‘My mum always told me “don’t you go getting yourself mixed up.”

“Of course, you wouldn’t listen to that would you Rosa,” laughs Margaret.

“Oh no… back then I had jet-black hair. I looked a bit Spanish myself. And I used to love the food, all the rice and what not. Funny, we’re not even allowed to use those words no more. But how do you think we’ve got all the names: Gipsy Hill, Gipsy Road…” Rosa waves her hand dismissively.

As I prepare to leave, I ask Rosa if I can take her picture. She’s not keen. “I prefer people to remember me how I was,” she says.

“Who does your garden Rosa,” I ask. I notice it’s in pretty good shape as I stand.

“Oh, that’s Pam. She’s the one made it look all nice. She’s finished now though, until the spring. She’s meticulous. Does most of her work with her hands. She even got all that old ivy off for me.”

I say bye to Rosa.

I explain I’m off to Italy on holiday and that I’d pop in when I was back.

“Muchas grazias,” she smiles, grabbing my hand between her two palms and holding it tight.

Click here to read part one: The Faces of Cressingham – Part One: Meet David