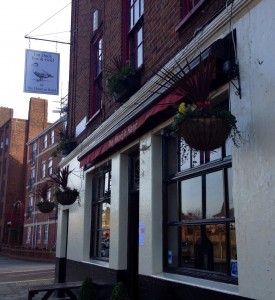 The Fat Duck, as you may know, is Heston Blumenthal’s three-Michelin-starred molecular gastronomic Mecca in the Berkshire countryside. Known for its three-hour tasting menu based around applied scientific principles, The Fat Duck is for those on a quest for one of life’s greatest culinary experiences, with a price tag to match. It was therefore a great curiosity to me that Fat Duck at the Hand in Hand, New Park Road, had opened recently. It takes confidence in your ingenuity and skill in the kitchen to latch onto such a strong association, so could it be Heston Blumenthal’s new pub venture? In a word: no.

Thursday is the new Friday the kids tell me, so a friend and I made our way through Brixton Hill’s dark, rainy streets to The Hand in Hand, in search of a few drinks and some food. As we walked into the bar, the regulars’ eyes turned toward us, and instantly we were in the wrong place, a tumbleweed moment. The dining room was empty, but the pub seemed relatively busy with live music; Open Mic Night turned out to be one of the highlights of the evening. The friendly bartender gave us a table out of the way where we could chat but still hear the music. The menu was limited, which I normally take to be a good sign: considered choice, seasonality and quality produce. For none of these reasons does Fat Duck limit its menu. It sticks to safe choices, pub food classics we know by heart: calamari, pâté, burgers, steaks, fish and chips, etc.

We settled on splitting the calamari, and onglet (skirt steak) with Béarnaise sauce for me, and a Fat Duck burger for my companion. The calamari arrived not long after, hot from the fryer and accompanied with a little pot of sweet chilli dipping sauce. The curls of squid were flakily battered, unevenly salted, and tasteless apart from the lingering flavours of frying oil and sweet chilli; the latter making anything palatable.

A long break between courses followed and our mains arrived. The steak was bland and over-cooked, despite the menu’s promise of medium rare. The Béarnaise sauce lacked any of the joyous aniseedy tang of tarragon and tasted more of minty mayonnaise. The steak was served with far too many weary-looking ‘hand-cut’ chips, an unappetising salad and onion rings, battered in similar fashion to the squid and equally uninspiring. The burger was also a disappointment. The stodgy bun required a trowel to remove it from the roofs of our mouths and the only real flavour was courtesy of the cheddar cheese. Coming with equal measure of flaccid chips and salad as the steak, I felt myself thinking that perhaps McDonald’s seemed more appetising at this point. At least it would have tasted like something, anything.

Seeming to ride ever so obviously on the coattails of culinary genius seemed a brave punt, especially for a pub restaurant. I did not expect iPods served with deconstructed fish pies or hazelnut foam with hay-smoked salmon, but I did expect a decent meal. A standard menu made up of substandard pub fare resulted in a waste of a dining experience and, whilst The Hand in Hand is a rather nice place to while away hours watching sport and listening to live music, eating there is one pastime that should be actively avoided.