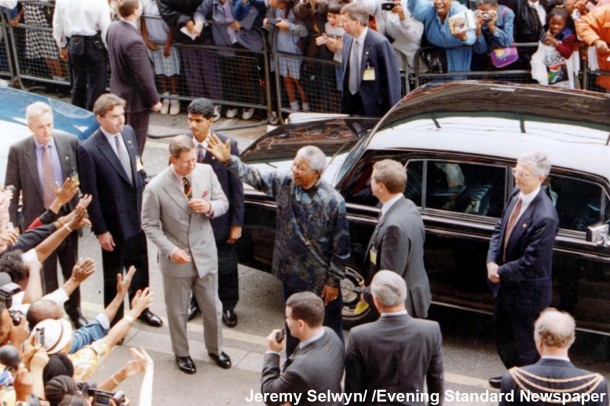 Struggling through the crowds and jumping up onto a market stall to get a good look at a grey-haired man in African dress, far away up on the Brixton Recreation Centre steps. It was he, not the prince standing next to him, who everyone cared about – he was, of course, Nelson Mandela. I was 10 years old in 1996 and, as a sign of how important a day it was, my primary school had let everyone off school for Mandela’s visit to Brixton. Some lucky people won tickets to get inside the Rec to hear him speak, others simply went to see him, chant his name and cheer him on as he arrived. When Mandela left Brixton to give a speech in Trafalgar Square, so many people ran after the car that Brixton Road was left littered with their shoes. Brixton’s experience of Mandela was a small but significant one – it was Brixton that he chose to visit, not anywhere else in the UK. Less than a decade before it had been the centre of riots, but it was also the centre of struggle for black rights in the UK, the home of Olive Morris, a place that had given a lot to the apartheid struggle, a place with a large black population, an iconic area. Today, some of those who saw Mandela in Brixton 17 years ago share their memories and pay tribute to a man whose influence across the world has been stronger than really anyone can say 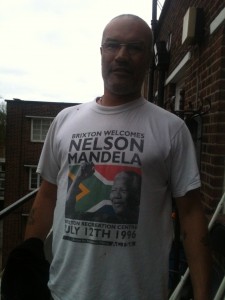 I was up bright and early so I made sure I got a front row place because I didn’t get a ticket to get in the Rec. I was outside the Jacaranda as it was then – now it’s that Craft Beer place. It was really good, I got really close to Mandela and Prince Charles. Someone put a girl over the railings with flowers to give to Nelson Mandela and the security got in a flap and put Mandela and Charles in a car to whiz them off to Trafalgar Square where he was giving a speech at South Africa House.

Everyone chased the car. There were shoes everywhere on Brixton Rd because everyone lost them when they were running. Everyone followed the car up to Trafalgar Sq.

We were so proud he was coming to Brixton – he’s the greatest man of our lifetime. He came to Brixton for a personal thank you. Through that time [apartheid era] no one would buy anything South African and everyone was going on all the marches.

That day when Nelson Mandela came to Brixton was the most important day in the history of Brixton. I was an agent between the anti-racist and the anti-apartheid movement in London. I took my kids off school that day, which I’d never done before. It was truly special. Whoever played the national anthem only played the first half – it was a terrible mistake. I feel very proud that Brixton was singled out, it was such an honour. The most famous politician in the world comes to London and chooses Brixton. Brixton had a long, active record of supporting the freedom struggle and that was presumably registered somewhere.

I was here, right on my pitch on the day that Nelson Mandela came to Brixton Recreation Centre. I remember the thousands and thousands of people that were here to see him, I remember the carnival atmosphere that we had and just the sense of one love. Brixton chooses people and I think Brixton actually chose Nelson Mandela to come here, so I think it was a match made in heaven myself. For Brixton’s history it’s a major event – I can’t really think of anything that’s been more significant as far as positive things go. The sense of respect for the man who’s a great icon – we can only be thankful that he came to Brixton. I hope that he’s at peace.

Back in the day, a community cricket player like me would try so hard to climb my way towards the top. Many players would be excluded or exclude themselves from the system, many then cope by trying to establish a variety of means, some not always desirable, to survive in their every day lives to distract them from their hidden disappointment.

Nelson Mandela gave up his life for people generally to have equal rights and justice, similar to Jesus Christ. On the day of his visit it was like having a proper Reggae blues dance (party). I took my son and explained the importance of his visit, we now share the same dream of a United World Cricket Team.

We stood on a market stall to get a good view (see below). We still have the T-Shirt.

I remember standing there in the big crowds, just past the bridge, and seeing Mandela on the steps there. There were big crowds. I was only eight years old – I am proud to have been there and to be able to say I’ve seen Nelson Mandela in the flesh.

I was incredibly excited. There were loads of people there and it was exciting. We came later than we should have done, so we weren’t very close. Everybody was chanting for Mandela. He came here because it’s an iconic place.

I didn’t get a good photo of Mandela when he visited Brixton in 1996, but I did get this – says it all: 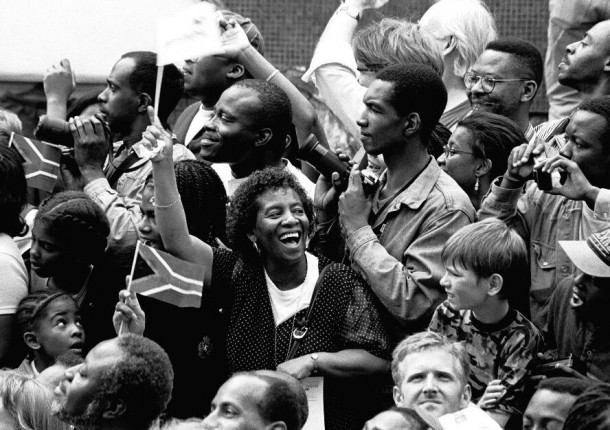 These memories are just for starters – please share your own memories and thoughts in the comments below.

Lambeth Labour refuse to be drawn on possible demolition of the...