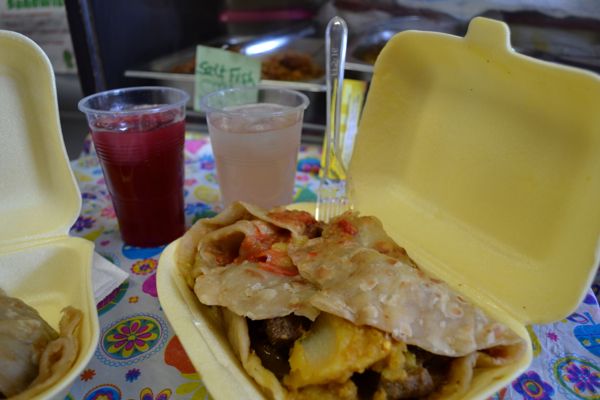 Max McBride reminds us that Guyana Rotis are still one of Brixton’s best meals.

The phrase ‘hidden gem’ is probably overused in the world of food reviews, but if anywhere in Brixton deserves this status, it’s the legendary Guyana Roti stand in the underpass by the entrance to the overground station. The roti stand is run by a wonderfully cheerful lady named Maureen Samuel – regulars call her Aunty – who makes everything by hand daily. She’s been trading since 2007 – longtime admirers of her wares will know her from her former residence in a distinctive blue caravan on Station Road opposite the Rec. Maureen was moved on from that location (and parted with the caravan) following a permit dispute with Lambeth Council last year, but her passion for all things roti remains undimmed.

The roti, for the uninitiated, is similar to Indian or South American flatbreads – a circular wheat flour dough rolled out and griddled or grilled. The end result is a soft, thin, slightly flaky and filling bread – not too greasy – perfect for soaking up the spicy, rich sauces and fillings which accompany it. It is usually served with a traditional meat or potato curry and sides of things like spinach, pumpkin or saltfish. On this occasion I was strongly encouraged by a concerned bystander to go with the goat curry roti meal. Their expression told of happy goat roti experiences past, so I gladly took up the advice.

The goat curry which came inside the roti was delicious – thick and flavoursome without being too fatty or salty, as was the tender goat meat. The potato curry which accompanied it was also lovely – chunky potato covered in a smooth sauce with traditional curry spices. The side of saltfish stew with callaloo was top notch too, although hardly needed given the size of the roti meal.The overall effect was extremely comforting – perfect winter food. All this was washed down by a glass of mauby – a traditional Caribbean drink made from the extract of tree bark and lots of sugar. It’s very bitter and definitely an acquired taste – I think my palate might need a bit more mauby training.

Maureen is a massive part of the appeal of this place – the food came accompanied by a good-natured stream of chatter, and she was eager to tell us her story and talk us through the menu options. She told us how she’d started making rotis when she was 13, and used to cook on a boat where she was required to make western food, until she made her rotis for the captain one time, who was so impressed that he demanded they become a regular fixture and that she show the rest of the crew how to make them.

I heartily concur with the captain’s feelings, and would recommend the Guyana Roti stand to anybody after some delicious, no-nonsense nourishment.