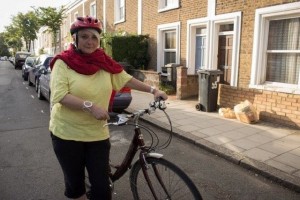 Mary Atkins is Lambeth’s newest councillor, having won her seat for Labour in a by-election last month.

She represents the Tulse Hill ward, which covers the triangle between Effra Road and Brixton Hill and runs southwards as far as Tulse Hill station.

She is no newcomer, though, to community politics, having been closely involved with the Tulse Hill forum – a voluntary group that aims to get local residents more involved in the decisions that are made about their area.

Among other things, she says, this has involved setting up a community choir. “It meant we got people from different estates to come to the Tulse Hill estate, which is almost unheard of,” she says.

There has also been a “green walk” and a project to bring internet access to a housing estate, which Atkins hopes will help to reduce the social isolation experienced by some residents.

“But I don’t want to sound like Pollyanna,” she says, after outlining the list of worthy projects she’s worked on. “Community politics isn’t easy, because you have to work with very different opinions, and often very strongly-held views from people who have lived here for a long time.”

She says this local connection (she lives in the ward she represents) was the reason she stood as a councillor when the seat became empty, following the sad death of councillor Ruth Ling in June.

“I’d been cleared by the party to stand as a councillor, then Ruth died,” she says. “I thought, if I don’t do it, they’ll parachute someone else in who doesn’t know the area.”

Since her election victory, Atkins has been getting to grips with some of the grittier realities of life as a local politician.

“I went out to try to take photos of dog mess on Rush Common the other day,” she says. “There have been complaints that it’s not safe for children to play on because of dog mess and condoms being left there.

“But you need the evidence in order to get council officers to go and inspect it. So I went and had a look with my camera, but I couldn’t find anything. So I said to the people who raised the concerns that they’ll have to take photos themselves or tell me when it is bad so I can come and take photos.”

As well as the “three Ps” that make up the bread and butter of many councillors’ work – “pavements, parking and potholes”, she explains – safety has been high on Atkins’ agenda over the last few weeks.

“I was cycling past the corner of Helix Road and Josephine Avenue other day and I saw a girl who had just been mugged,” she says.

“A couple of other residents have also raised with me that there is a problem of rising crime in that area. So I spoke to the police about it. They said they were aware of it and were increasing patrols.”

But what more can the council do about it? “Well, I noticed the corner of Josephine Avenue and Helix Road is very dark, so I’ll be looking at whether we can get more lighting. Some of the residents want CCTV, but that would have a lot of implications and some people wouldn’t want it,” she says.

“It’s an example of what you have to do as a politician – you have to look into the issues and make decisions that may be positive for some people and not others.”

During her election campaign, Atkins said she would be an “independent-minded” Labour councillor, acting in the interests of the local community rather than being a slave to the party line.

“I see my role as speaking for the local people rather than saying, this is the party policy,” she says. “And I hope I’ll always do what’s right for the long term, not the short term.”

So, might this happen in the row about the Cressingham Gardens housing estate? Residents of the leafy estate, which is next to Brockwell Park and was built as social housing, oppose a plan by the council to demolish and rebuild some or all it. “We want the estate repaired not privatised,” they claim on their campaign website.

Atkins says she understands residents’ concerns, but hopes that consultation and discussion will bring about a solution.

“As I understand it, nobody knows what’s going to happen yet,” she says. “The council is bringing in specialists to do a consultation with the residents. So nothing will be imposed on people. But, again, you’re not going to please everyone.”

Asked whether the estate will have the same proportion of social housing in future, she says: “I don’t know what the options are – I’ve got a meeting about it next week – but I know they’ll want to keep it as green and leafy as possible.”

And what about the other big housing issue, the evictions of the Rushcroft Road squatters last month?

“When you see the pictures of what happened, you do have an emotional reaction,” she says. “You think, oh my god, people are losing their homes and it looks so awful.

“But you have to look at the issues behind it, and the money raised from those houses can go towards making the rest of the council’s housing stock a lot better. I do trust Lambeth council to do that.”

During the Brixton Blog’s hustings event ahead of Atkins’ election victory, she was quizzed repeatedly about her stance on welfare. Should the council would follow in the footsteps of a handful of others across the country by refusing to evict tenants who get into arrears as a result of the government’s “bedroom tax”?

Asked whether she has reflected on the issue now that she’s been elected, she says: “The first port of call is to support people and help them to swap their houses or get them into jobs, because then it [the bedroom tax] doesn’t apply,” she says.

“And then, I don’t know what the policy will be after that. But I hope it will enable people to stay in their homes.”

Whatever happens, Atkins is being held closely to account by the voters, because – like all of Lambeth’s councillors – she will have to face another election in spring 2014.

“I don’t mind that, because I love talking to people on the doorsteps,” she says. “I think it does every politician good.

“It’s my idea of heaven – although it’s everyone else’s idea of hell.

“I’ve got a year to make myself well known and useful, so that’s what I’ll try to do.”