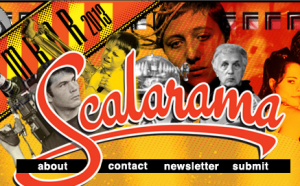 Fearlessly venturing into the outer reaches of the cinematic experience the Scalarama film festival launched in style this past Saturday at Brixton’s very own legendary picture house, The Ritzy. Following on from Scala Forever and Scala Beyond, this year’s Scalarama will once again be resurrecting the eclectic and forward thinking spirit of London’s most infamous and celebrated repertory cinema with a series of events taking place throughout September.

The official launch began on Saturday with the cult movie cornucopia that is Film Jam. In Screen 2 some of the city’s greatest film clubs and film events organisers gathered to share and express their love for cinema and introduce a series of shorts and clips that best reflect their warped agendas and interests. It was an epic evening of unearthed lost gems with some unforgettable, questionable, but always entertaining highlights.

Savage Cinema had an exceptional showreel of clips picked from their screenings of underappreciated and forgotten films such as Ganja and Hess (1973), Matinee (1993), The Reflecting Skin (1990), and William Friedkin’s divisive thriller Sorcerer (1977). We were also treated to the first ten minutes of Cohen & Tate (1988) which I haven’t seen since it first came out on video and I honestly don’t remember it being as odd and off kilter as it seemed the other night.

Cigarette Burns Cinema certainly hit the jackpot and gave the evening a full slam tilt with their 35mm print screening of Arcade Attack: Silver Ball Heroes vs Video Invaders (1982). A twenty-five minute documentary on pinball machines and the rising threat of video arcade games such as Defender and Space Invaders, with champions of both battling their corners. With great footage of early eighties London, old school machines, a fantastically glitchy soundtrack, and the occasional excursion into bizarre animations, Arcade Attack is a surprisingly well directed, surreal, hilarious and inventive short film.

VTSS (Video Tape Swap Shop) delved into one of the most dubious of comic book hero sub-genres, Bootleg Batmen, which consists of increasingly strange and unauthorised foreign language film interpretations of the Batman universe, such as Mexico’s The Batwoman (1968). But the Philippines were the biggest culprits and one their oddest attempts at bringing the caped crusader to the big screen is Alyas Batman en Robin (1991), which VTSS edited down to an insane visual mash up of bizarre musical sequences and incoherent chase scenes all on glorious VHS. It was confusing, ridiculous, deeply strange and utterly brilliant.

Filmbar70 took things to another level with their absorbing and fascinating journey through the London Underground tube system via seventies British cinema. It’s a heartfelt, entertaining and expertly put together piece a work that I genuinely didn’t want to end, and I’d love to see a longer version come into existence. If you get the chance see it it’s an absolute must.

Another mesmerising and intriguing visual treat was the beguiling trailer for Zipangu Fest curator Jasper Sharpe’s feature length documentary on slime mould, The Creeping Garden, featuring a score from Sonic Youth producer Jim O’Rourke. It’s certainly an original concept and the footage looks incredibly cinematic for a film about mould, and could quite easily be mistaken for a psychedelic sci-fi.

On a musical note upstairs at the Ritzy, crate digging vinyl buccaneer El Diabolik’s World Of Psychotronic Soundtracks delivered the goods in regards to mind blowing esoteric film scores and epic, filmic beats. Those massive multiplexes may have the vast space, the blockbusters, the money and the gimmicks, but they’ll never have a room full of excitable film fans throwing shapes to the Phantasm soundtrack, and that’s a beautiful thing.