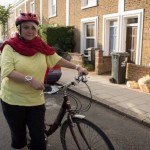 Labour’s Mary Atkins has been elected as a councillor for the Tulse Hill ward, winning 69% of the vote in a local by-election.

In a speech to mark her victory, Atkins paid tribute to Ruth Ling, the Labour councillor whose death last month prompted the by-election.

“I look forward to carrying on the work of Ruth Ling, who worked so hard for Tulse Hill,” she said.

In her speech, at Brixton’s town hall on Thursday night, Atkins said that whilst out campaigning on the doorsteps she had noticed “anger and bewilderment” about the government’s policies.

She also warned that “apathy and alienation” affected all political parties.

Amna Ahmad told the Brixton Blog: “It’s been a really good second place result for us. We’ve got 14 councillors in the borough and we look forward to bigger and better things.”

Turnout for the by-election was 20%.

VIDEO: The moment the result was announced – and Mary’s speech

The results in full: