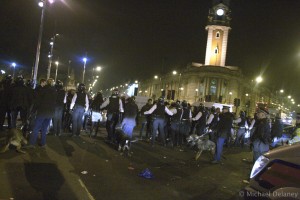 A woman has been jailed for burglary at a Brixton charity shop following this week’s Thatcher “death party”.

Police said Alejandra Sanchez, 21, of no fixed address took advantage of a smashed window of Barnardos, Brixton Road, to try and steal items. The glass had earlier been broken by people attending a party to celebrate the death of former Prime Minister Margaret Thatcher.

Sanchez was jailed for 28 days at Camberwell Magistrates yesterday (Thursday). A 20-year-old woman arrested at the same time was released with no further action.

DC Andy Hall, of Lambeth police, said: “Sanchez took advantage of earlier disorder which culminated in an unprovoked attack on Barnardos to commit a burglary in a shop which seeks to raise money to help children.” 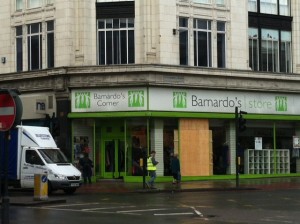 He added: “Hopefully this swift sentence will show that criminality, no matter what excuses people hide behind, is unacceptable and will be dealt with. I appeal to anyone who has information regarding the disorder from Monday evening to contact the police or Crimestoppers.”

A police spokesman said a man was arrested for criminal damage after the window was smashed, just after midnight on Tuesday (April 9).

On Tuesday, a group calling itself the Informal Anarchist Federation claimed responsibility for the smashed window. Writing on the website Indymedia, one activist said: “On the celebration of Thatcher’s death, we smashed a window of Barnardo’s ‘charity shop’ in Brixton using a concrete slab from a bin on the street. And it was easy. We would of done more if it weren’t for self-proclaimed pacifists violently attempting to arrest us.”

They added: “This action was in solidarity with all migrants detained, deported and struggling to cross borders. Barnardo’s was targeted because they fund and administrate Cedars detention centre in Croydon. They detain children, families and individuals who merely seek freedom from poverty, persecution, murder, rape and other oppression the borders.”