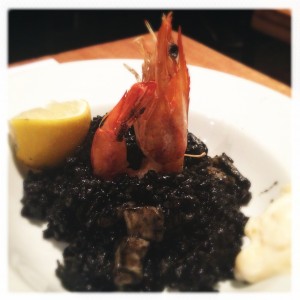 As the main artery between Brixton and Clapham, and accessible only by foot or bus, Acre Lane may seem like a culinary no-man’s land. The Tesco and Access Storage bookend a strange mix of businesses between them and “dining” seems limited to a number of caffs and a few takeaways. But appearances can be deceiving and Acre Lane is also home to two particularly fantastic restaurants: the elegantly understated stalwart, Upstairs, and the relative newbie, Boqueria. Already establishing itself as a formidable addition to the Brixton dining scene after being voted Time Out’s Best New Cheap Eats 2012, Boqueria continues to make a name for itself both in and outside Brixton, and deservedly so.

We ate there on a Tuesday night, a tumbleweed scenario in many restaurants outside the centre of Town, but Boqueria was busy. Its sleek bar mostly filled with urbanites enjoying cool glasses of sherry and nibbles; the back dining room noisy in a good way and filled with couples and friends enjoying a night out, safe from the freezing temperatures outside. Their menu is comparatively large and full of traditional tapas dishes like tortilla, croquettas and chorizo, but goes further with its profferings of paella and jamon, among other things. On this particular evening, two specials called to me: calçots in tempura with romescu sauce and quails eggs in ratatouille. We added roasted Padrón peppers, carrillada Ibérica (pork cheek braised in red wine), and arroz negro (black rice with squid and mussels) to our order, all of which was accompanied by dry Tio Pepe and followed by a medium-bodied Rioja.

The calçots, a type of spring onion that hails from Catalonia, were fried in a light tempura batter and served with romescu sauce on the side. I found the tempura a bit unnecessary but enjoyable all the same. The romescu sauce was good but tasted more of tomatoes than red peppers and lacked the piquancy I’d hoped for. The quail’s eggs were a revelation. Fried and a bit wobbly, they gleamed up at us, perched on a flavourful ratatouille. Everything in the dish worked together beautifully. The roasted Padrón peppers, although a touch too bitter, were brought back to life by sea salt and good olive oil.

Carrillada Ibérica was hearty and deeply wintery. The pork was tender and delicious; the red wine sauce was rich and intensely flavoured. It all tasted as if it had been cooked for hours, exactly as it should have. Finally, came the arroz negro. The black paella-like rice dish had a nice backbone of seafood flavours, enhanced by bits of squid and mussels nestled within. Accompanied by a nice dollop of aïoli and garnished with a beautiful grilled prawn set into the dish like a crustacean Venus, it was well worth the pre-warned 25-minute wait. We finished with a decent crema catalana, then rolled our happily sated selves home.

Boqueria is delicious, relatively inexpensive and all within walking distance for us Brixtonites. Whilst Brixton Village continues to attract diners with its excellent diversity of restaurants, Acre Lane is proving to be a marvellous collaborator. From Caribbean to Catalan, great dining on our doorsteps now exists in even greater abundance. Why would you want to live anywhere else?

Meal for two, including drinks and service £50.