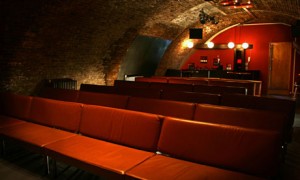 Typical Loughborough Junction. It turns out there’s an art-house cinema over the road. I’d lived here for five years and had no idea.

On a chilly Sunday evening, I wrap up for the short stroll to Whirled Cinema – another Loughborough Junction hidden gem. It’s tucked under a Victorian railway arch in an easy-to-miss alleyway off Herne Hill Road.

A lady opens the metal door with what looks like an Oyster Card. Up the staircase and into the main room where six rows of leather seats face a big screen. The arched roof, reddish exposed brick-work and low lighting give the cinema a warm, intimate feel. The bar at the back is well stocked.

That night Whirled was showing “Silent Souls”, a Ukrainian film about a man who goes on a road trip with a friend to cremate the dead body of his wife. It’s challenging stuff for a Sunday night.

Did Rob Lindsay, the cinema’s manager, ever worry about opening an art house cinema in Loughborough Junction?

It was a gamble admits Rob, who quit a 20-year career in motorbike couriering to start Whirled Cinema. He runs it with the help of five volunteers. They now screen films Wednesday through to Sunday.

“It’s been a journey. None of us had a cinema background. The aim was to create an affordable, different kind of cinema experience in an area where there’s nothing else going on. It was always a big gamble.”

Rob barely does any advertising. The secret of their success is being a members-only cinema.

“When we started we didn’t want to pay someone to do box office. It was an additional cost, so we stumbled across the idea of doing membership….and it really worked.”

Membership is £65 a year or £8 for a week. There are more than 600 members. It makes business sense. But it also encourages cinema goers to take a punt on an art house film.

“When you have to pay £13 to see a film you’re taking a risk. Our members might look at a film and be unsure… if they have to pay £13 they definitely wouldn’t go, but because they’ve already paid their membership they can come down just for the experience. It means you can programme films that you know wouldn’t be a box office success.”

Rob describes their film policy as “the best of art-house, world, indie and we try to support British film industry wherever we can.”

“You could put on Skyfall and people would be queuing out of the door but it’s not what we do. It’s about showing different films, broadening people’s cinematic experiences.”

Like Turin Horse. It’s about a rural farmer who is forced to confront the mortality of his faithful horse. There’s no dialogue in the first 20 minutes.

“We had the most walk outs that we’ve ever had. It’s been one of the most talked about films ever since. The nice thing about member cinema is that people get to know each other, so they hang around for a bit and have a chat.”

That’s exactly what I’ve been doing. A train rattles overhead, giving the cinema a gentle shake. As I head off I realise I never asked what the deal is with the Oyster Card.