Tucked away among the spray shops and MOT garages of Loughborough Junction’s railway arches, Miguel’s Gym looks like your archetypal South London boxing club. Whilst a number of local professionals including Dillian Whyte train there, the gym is also involved in a range of community projects and well-being initiatives – it has even hosted Eminem and Dr Dre.

“We’ve always produced champions, but we’ve kind of switched it,” says owner Steve Miguel who opened the gym in 1998. “We’re trying to give our knowledge to the public. That’s how Miguel’s name has been built because we’re giving you authentic boxing training.”

During the day the professionals pound the heavy bags under the guidance of their trainers, but evenings and weekends are reserved for a range of different classes for all ages. Women outnumbered men five to one at Monday night’s mixed beginners boxing class.

“Zumba wasn’t for me,” said 37-year-old Charlotte who was attending her third session. “It’s a great workout here and the trainers are really impressive. There’s been a lot of girls here the last couple of times.”

Miguel’s runs £1 classes for unemployed people, an obesity programme including training and diet plans, and classes for over-60s. The trainers also go to local schools to teach the sport’s principles of discipline and respect alongside twice weekly after-school kids’ classes at the gym.

Boxing is one sport that can claim a genuine legacy in terms of grassroots participation and continuing success at elite level following the London 2012 Olympics. This sport’s growing popularity is reflected in the gym’s plans for expansion.

“We’ve got so busy that we’ve taken on another arch,” says Miguel who intends to install another 50 heavy bags upstairs where the ring sits under exposed brickwork and corrugated iron shaken by passing trains.

It is a ring that has seen Eminem and Dr Dre step between the ropes to perform a battle rap for the UK press launch of the Slim Shady LP. Mike Tyson and Floyd Mayweather have also passed through while in the UK.

The current stable of professional boxers fighting out of Miguel’s includes Dillian Whyte, Ian Lewison, Isaac Chamberlain, and Dominic Akinlade. Also among the current crop is Rakeem Ashaye Noble, a 26-year-old Law graduate from Croydon who turned pro in 2012.

Rakeem knocked out the undefeated Sohail Ahmed to win the southern area super lightweight championship in March and was embarking on a training programme ahead of his next fight in July.

“The eight-week countdown starts from today. It’s all high intensity – boxing, sparring, running, cycling, swimming, conditioning, weights. By week six I should be there and then I’ll taper. I’ll be discussing tactics with Don and John from an early stage.”

Don Davis and John Simms are Rakeem’s trainers.  You would be hard pressed to meet someone who lives and breathes boxing more than Davis – a former professional who competed at super welterweight in the 1960s.

Forced to retire early due a serious eye injury, from his lowest ebb on a hospital bed in what was the Royal Eye Hospital in Elephant and Castle, he gave up his dream of becoming world champion and decided to dedicate himself to training others.

Davis was Britain’s first black trainer when he got his license in the 1960s and went on to become the first black man in Britain to train a world champion when he guided Dennis “The Hackney Rock” Andries to the light heavyweight title in 1986.

Davis is a man with a passion for the science of the sport and he learnt from the very best including Muhammad Ali’s trainer Angelo Dundee as well as world champions Ingemar Johansson, Sonny Liston, Marvin Hagler. He has seen first-hand what boxing can do for young people.

“I’ve helped a lot of fighters, people on the street, bad boys. I take them from the street and say come here. Some of them do alright, some of them don’t have the ability.”

Sammy McKay is an example of someone who has turned their life around at Miguel’s. A product of the Lambeth Boxing Initiative – a London Fire Brigade venture based at Miguel’s to help young people in South London break away from gangs – he is now club captain.

“Boxing teaches you healthy eating, all the stuff you need to do to keep you fit, like cutting out late nights all the things that help your body to recover quicker. It teaches you a lot of discipline,” says McKay.

“The people are really friendly here. There’s a lot to learn from everyone and everyone respects each other. When you’re speaking to someone like John Simms, Don Davis or Richard Williams [former world light-middleweight champion and another of the gym’s trainers] they all talk to you with respect.” 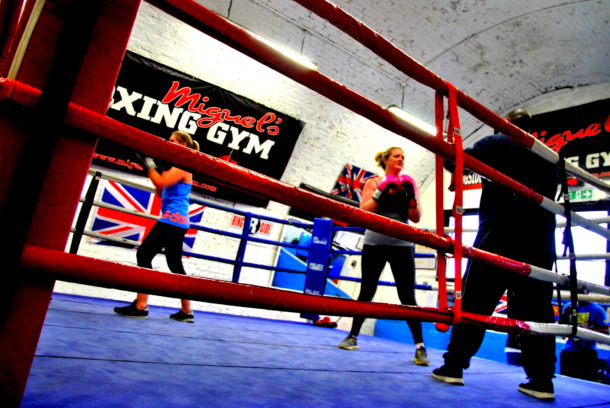 The next step for McKay, who hopes to turn professional next year, is the Haringey Box Cup, Europe’s largest amateur boxing event. He will be competing alongside six other fighters from Brixton at the Alexandra Palace in June.

McKay recently introduced his friend Malachi to the gym, a 21 year-old with a hulking 6’5 frame. He had only been training for two weeks but the trainers already had high hopes.

“He’s got a boxing brain,” said John Simms as Malachi towered above Don Davis in the ring receiving detailed instruction on his footwork and the correct hand position for a left-right combination. “Give him six months – if he sticks with it he will be competing.”

Miguel himself is clear on what he thinks will help address the problems young people, particularly young men, face in the area today.

“I’ve seen it so many times ‘we’re going to change this and that by investing £10k in this project’ it doesn’t change anything for these guys.

“What changes it is role models. They come in here and they see role models, they see old guys training people. We look after them and give them the opportunity to change their life and that doesn’t cost anything.”

Miguel’s Boxing Gym has been changing lives for the best part of two decades and that is priceless.