Residents in Brixton Hill ward will go to the polls on January 17 2013 to elect a new member of Lambeth council.

The by-election was triggered after Steve Reed, former Labour councillor and leader of Lambeth council, was elected as MP for Croydon North before Christmas.

Seven wannabe councillors have put themselves forward to represent the neighbourhood, and the succesful candidate will join Labour members Cllr Alex Holland and Cllr Florence Nosegbe.

The Brixton Blog has organised a hustings to give residents the chance to quiz all the candidates on their vision for Brixton Hill. It will take place at Corpus Christi catholic church on Thursday January 10, at 7pm. For more information see the flyer below.

Brixton Hill ward has some 12,500 residents. It is bounded by Brixton Hill to the east, Acre Lane to the north, and in the West by Kings Avenue. Streatham Place forms the southerly border. The ward has higher levels of long term unemployment than many others in Lambeth. 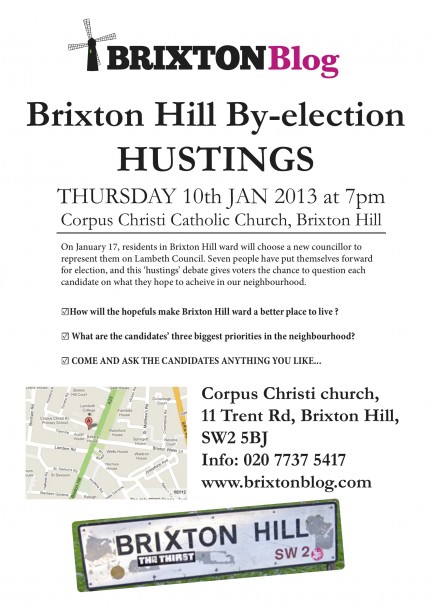 ‘Every little helps’ as planning permission for Tesco at George IV...