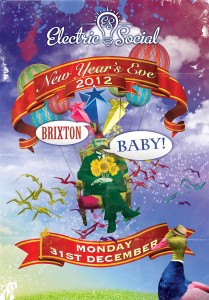 ‘So this is the new year’, sang veteran American emos Death Cab for Cutie, ‘and I don’t feel any different’. Ben Gibbard clearly hadn’t just watched Mylene Klass on telly trying to corral people in mittens into singing Auld Lang Syne on South Bank after two bottles of Sainbury’s cava when he wrote this. That’s the sort of thing that can really ruin your night.

To avoid starting 2013 with Klass and miscellaneous Radio 1 DJs presenting identical scenes from around the nation, and Jools Holland, it’s probably best to go out. Perhaps you are invited to a sparklingly sophisticated party – ball even – and keenly anticipate spending a perfect night with your best friends. No? Of course not. This is the NYE equivalent to a John Lewis Christmas and just doesn’t exist.

If you haven’t made plans yet here is a quick run down of what’s going on in Brixton, and how to get a ticket. Let’s face it, it’s better to stay close to home. The tube may run all night but this is when we find out why it doesn’t usually. That sort of concentration of drunk people is highly inadvisable underground in a restricted space.

Dogstar regulars Audio Sushi will be hosting NYE with all three floors full of festivities until 6am. Tickets are a tenner, on sale here. Do take along ID to this. It sounds silly but it’ll all over their promo stuff and they wouldn’t let me in without it once, despite being almost pensionable.

The Duke of Edinburgh definitely knows how to throw a party. And a free one at that. It’s masquerade ball on New Year’s Eve. They are currently trying to get permission to stay open until 7am (7am!) Expect surprises, apparently. 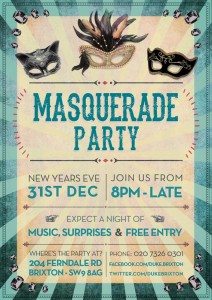 Electric Social have named their New Year’s Eve party ‘Brixton Baby’. For £20 you get entry, a glass of Moet (between 8 and 11pm oddly) and some nibbles. Playing house music upstairs and cheese downstairs until 4am, there’s tickets to be had here or buy direct from Electric Social to save the booking fee.

The Hootananny appears to be holding the NYE’s party equivalent to a pot-luck supper, with all sorts of musical genres making an appearance. Energetic lycra-fans The Correspondents are bringing the electro, Coda have got some Dub to contribute, Bristol-based Sheelanagig have got the Balkan folk thing covered, and Soul Jazz Soundsystem have a massive mixed grill of dancehall, afrobeat, house and jungle on offer. There are tickets here. From 9pm to 3am. 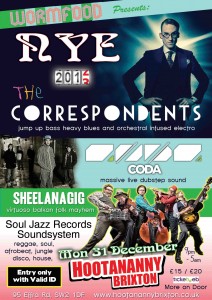 Kaff Bar will be open until 5am on New Year’s Day and it sounds like it’s going to be quite the party. DJs Whiskey Kittens will be (ostensibly) in charge, overseeing burlesque dancers, a rock n’ roll band and a Bowie tribute act. Your £15 tickets include a cocktail, bubbles at midnight and some sort of buffet. At the moment, it’s sold out online but you check to see if they still have some at the bar.

Market House is celebrating its first New Year’s Eve, after opening earlier in the year. Tickets are £10. Shake your stuff around the shabby chic to Latin and funk downstairs, and more soulful tune upstairs courtesy of DJs Chris and Cindi who run United80 retro shop in Brixton Village. The party kicks off at 9pm with bubbles and happy hour cocktails for the early birds. Tickets here to avoid the booking fee, and contact Market House directly to reserve an area.