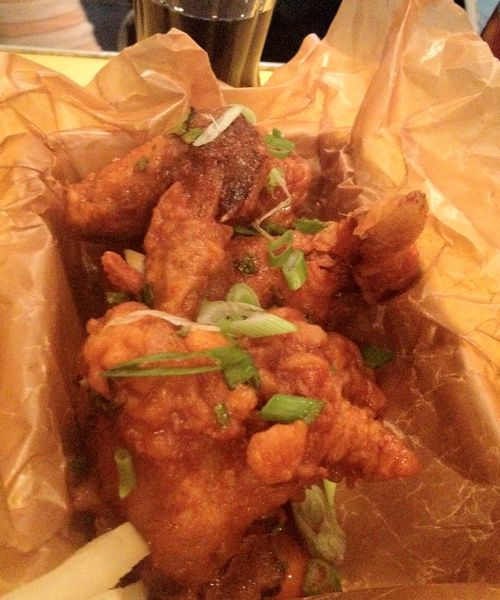 The long awaited fried chicken joint Wishbone Brixton has been positioning itself to be the big daddy of the current ‘dude food‘ craze sweeping London with its dirty burgers, pulled pork and deep fried sides. For some reason London’s favourite fried chicken hadn’t really been touched by the trend to take takeaway style food to a proper table and treat it to a night out. Promising something cooler than Nando’s and a lot higher animal welfare with free range meat, Wishbone has finally opened in Market Row after teasing everyone with the promise of finger licking fun.

I’m sorry to report that it doesn’t live up to expectation. From first entry, it feels confused. A wide shopfront seems to promise tables outside but there were none there. Past the totally non accessible step that tells you this is neither family (nor disabled) friendly, there’s a huge bar and a scattering of small high formica tables that seem to have very few seats to go round. Unable to venture upstairs since we had a small baby in a pushchair, we perched on seats that had been specially brought and were brought the huge drinks menu immediately.

Oddly the food menu is on a blackboard in the far corner, partially obscured by the overhang of the bar and the fact that it’s not clear whether this place is order at the bar or sit down service confused things. We peered at it as best we could, coming to the conclusion that the downstairs of Wishbone is more designed to be a stand and drink style joint with small dishes of food to soak up the impressive range of whiskey, gin or vodka sours. Being 4pm, it wasn’t quite cocktail hour for either of us so we fancied trying one of the much vaunted craft beers. But there were only 3 choices, Vedett, Budvar or one I can’t read from where I scribbled it down. At £4 a bottle and offering nothing to rival old favourites or new finds at The Craft Beer Co or The Crown and Anchor, we went for a Coke and a Dr Pepper instead, despite the menu being no more descriptive than ‘softs’.

But hey, we weren’t there for the booze. We were there for the chicken. You pick from three sorts of wings, two types of thighs, 1/4 or 1/2 chickens and side dishes. We went for Korean fried wings since chicken lovers will tell you they do it better than anyone else in the world. We also swooped in on Salt n’ Pepa thighs and deep fried mac n’cheese and fries to get us going. Being the first day, the 1/4 and 1/2 chickens weren’t on the menu yet and from craning our heads, we didn’t spot any veggie main options or gluten free choices. Slightly harried staff offered very little info about the food and the free range aspect is only mentioned in passing.

I sincerely hope those chickens had good lives, because they did not have good endings. The Korean wings were huge unjointed untipped beasts not clad in the double dipped willo-the-wisp light batter you expect from Korean master fryers, but dunked in heavy thick batter that tasted packet made and doused with a single note vinegary sauce that could strip paint. I couldn’t find the rumoured daikon. The salt n’ pepa thighs weren’t on the bone, but nugget style in a Southern fried style that reminded me less of Memphis and more of M&S Southern Fried Grills, only less moist. There was another potently vinegary sauce on the side for dipping. My American dining companion was certainly not impressed. Fries were anaemic and tasted like Maccy D’s. Deep fried mac n’cheese was lumps of macaroni cheese straight out of a box, underseasoned, mixed with lurid fake ‘cheese food’ and coated in crumbs almost as luridly coloured. Everything dripped with oil on the fingers and we needed the thoughtfully provided napkins and wipes. 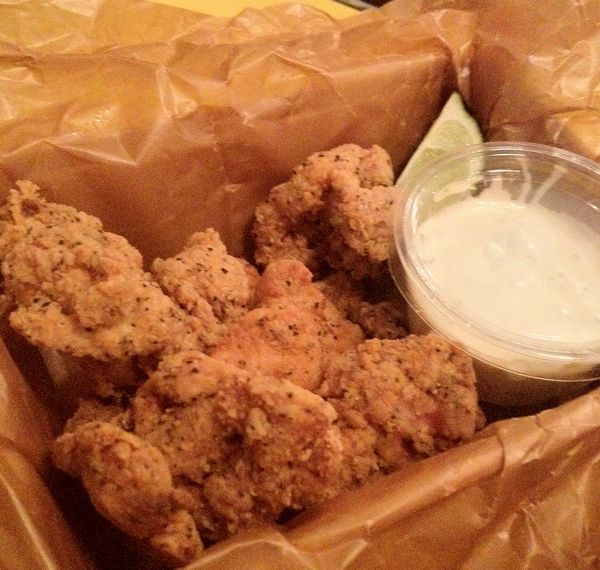 I see why the focus is all about the bar. This is the type of food that could only taste good when you’re tipsy. A whiskey sour would cut through the oil at least. But stone cold sober, we struggled with it, finishing none of the dishes. Portions that looked well priced and generous in size became a burden. At £5.50 for the thighs and £4.50 for the 4 wings, £4.50 for the mac n’ cheese and £2.50 for the fries, this would be good value if you finished them all. As it was, we barely knew what to say when the waiter took the remains away. This wasn’t the usual teething troubles of opening day. It was bad food cooked badly.

Everything about Wishbone smacks of a commercial endeavour to get a bar opened in the trendiest bit of town. The food seems extraneous to the booze. There’s no passion or excitement about what you’re eating and the detail is slapdash. The atmosphere is heavily male to the point of note and the whole thing seems like a box ticking exercise to pull in the hipsters. There’s certainly been no interaction with the Brixton community I’ve seen and there wasn’t even a sign outside to announce itself to Market Row on opening day. I had high hopes for Wishbone, but left neither welcomed nor wowed. When I want chicken in Brixton, I’ll be going to Mama Lan’s for wings or Curry Ono for fried chicken and leaving this place to the visitors it is so obviously aimed at. 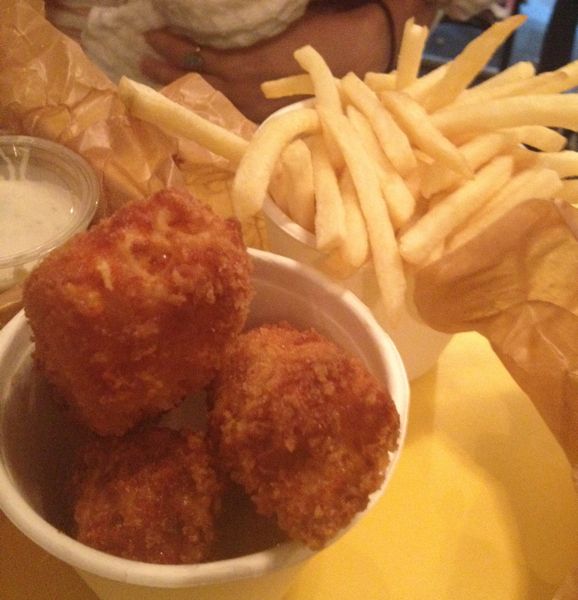