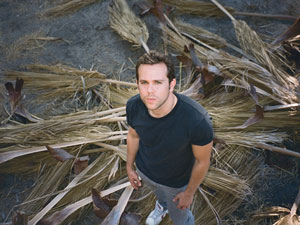 M83 have moved far away from the shoe-gaze tinged sound of early records like ‘Dead Cities, Red Seas and Lost Ghosts’. Thursday’s show at Brixton Academy is a fitting reflection of this – a celebratory finale of their European tour, matched by a spectacular light show that should carry a health warning about the possibility of a seizure.

There are times when the band’s music runs the risk of becoming homogonised. It can be a cacophony that builds gradually, but when the risk of tedium rears its ugly head, M83’s sound crescendos to a pulsating momentum that a dazed audience can do little but nod appreciative heads to.

‘Hurry up we’re dreaming’ is the name of the group’s latest record – rather appropriate given the starry eyed expressions on faces during the set’s more reflective moments like ‘Wait.’

The rabble of chatter from the back of the Academy compliments this track rather than interfering with it – it is as if the music is a dream immune from interruption, drifting on regardless of attempted intrusion from the outside world.

The band’s set comprises of songs mostly from the last album – by far their most commercially successful. The euphoric single “Midnight city” was a catalyst for this, and when played, inspires punching of the air by the audience – fully justified by what has become their anthem. An inspired saxophone solo plays the song out.

It would have been an imaginative older fan of M83 to predict future scenes like this at one of their gigs, but the Pitchfork-reading audience members in My Bloody Valentine t-shirts are not completely left out in the cold. Older tracks like ‘Sitting’ and ‘Graveyard Girl’ are given an airing here.

Anthony Gonzales and his brother Yann inspire frenetic energy. Yann in particular – continually leaping about the stage and engaging in musical flirtations with vocalist/keyboardist Morgan Kibby, face to face to no doubt develop a mutual connection with the music, but also to jump up and down rather a lot.

If there is something truly memorable about the evening it comes in a light-show it is impossible not to be impressed by. Those who didn’t get to any firework display are given a visual feast far outstretching a consolation.

The spectacle is no more impressive that it is on set highlight and closing track ‘Couleurs’, from 2008’s ‘Saturdays=Youth.’ The affinity for shoe-gaze guitars is put aside and replaced by a thrilling 10 minutes of pulsating electronica, where lazer beams become indistinguishable from one another in a tumultuous climax. The indie gig is transformed into the atmosphere of a club, but just as the audience is putting on their dancing shoes, it’s all over.

It is only half ten in the evening, but the Brixton audience has no doubt been left inspired to carry the party through to the small hours.

Leslie Manasseh - 16 October, 2020 0
Celebrate Black History Month with “Legacy & Hope” a concert by The Pegasus Opera Company. This free performance can be viewed at 7.30pm on Sunday...

Three in court after police discover 43 mobile phones stolen from...

12 November, 2014
Go to mobile version
We use cookies to ensure that we give you the best experience on our website. If you continue to use this site we will assume that you are happy with it.OKPrivacy policy