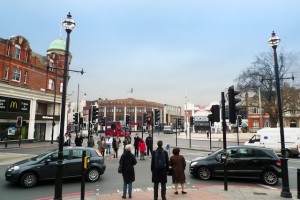 Holiday Inn has gained permission to turn central Brixton into a building site for the foreseeable future to build a 118 room hotel above the former Woolworths. This is a bit of a shock for many locals, especially given a lack of consultation with nearby residents and an apparent absence of the usual planning notices.  This is disappointing for a council that sells itself on its “cooperative” approach and community involvement.

Long term residents and political idealists – myself included – will predictably moan that the space could be used for truly affordable social housing (which is severely lacking in Lambeth, and continues to be squeezed) or an extension of our world-famous market housing a variety of small, independent businesses. But we’re realists too. The relentless forces of change, development and redevelopment are inescapable. Whether it’s Granville Arcade filling up with boutique cafes and food shops from 2009, the remodelling of the tube station and high street in the early 2000’s (which brought us Footlocker & Sainburys Local) or the conversion of the Atlantic pub into the Dogstar in 1994, Brixton has always been changing.

Of course a hotel will bring jobs (as any development would) but are they the sort of jobs we want? Holiday Inn had to quickly back out of the Government’s unpaid workfare scheme earlier this year after national protests, and is still suspected of involvement in unpaid labour.

What I object to is actually the homogenisation of Brixton. The Future Brixton Masterplan developed between Lambeth Council and the community in 2009 gave a strong message that residents wanted to retain Brixton’s unique character and diverse range of shops and businesses. Adding another multinational chain further erodes what diversity we have left.

What sort of Brixton do we want? A unique, diverse and interesting place offering something for everyone? Or a UK clone-town high street, indistinguishable from Gloucester, Luton or a Westfield shopping centre? Holiday Inn or not, we are gradually drifting from the former to the latter. I think we need to constantly question proposed developments like this if we value the unique character we currently have here in Brixton.

Residents have started a petition against the hotel, for those interested.

Tony Browne writes about why the Holiday Inn development is good for Brixton.