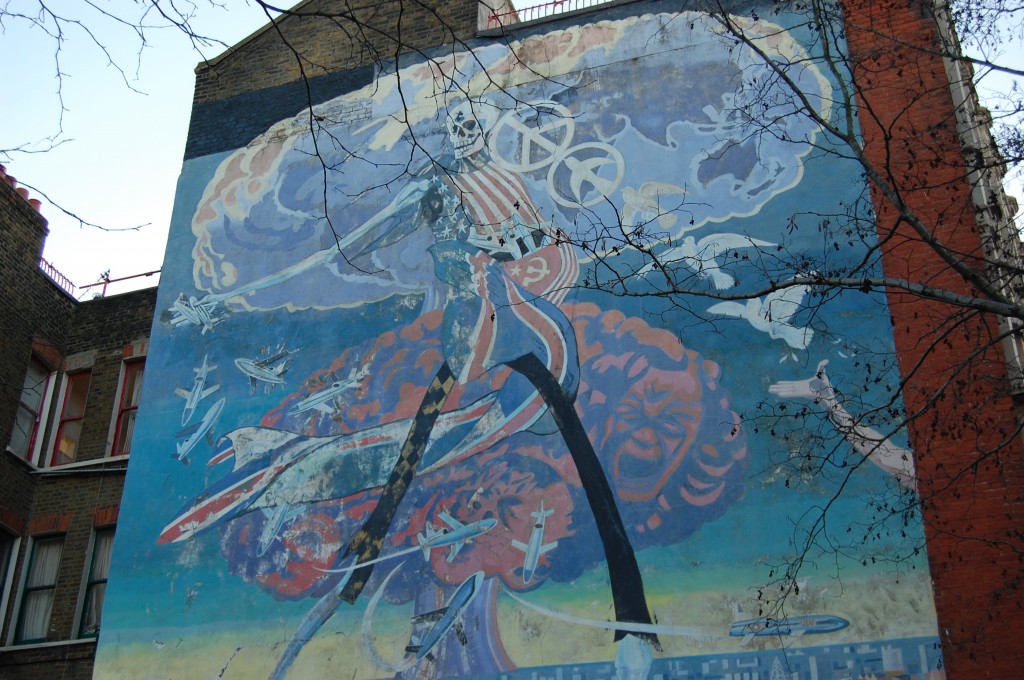 Brixton’s mural campaigners want Nuclear Dawn to be the next in line for a makeover, after the successful restoration of the Windmill mural on Lyham Rd last month.

Ruth Miller of the London Mural Preservation Society has started up the campaign to get the thirty year-old Nuclear Dawn mural restored.

Many of those involved in the Windmill mural restoration, including organiser Vinnie O’Connell and Positive Arts are on board. LMPS have also managed to get the support of Brian Barnes, the artist who painted the mural in 1981, now keen to be involved with the re-painting.

The campaign is just at its first stages. “We need to get an idea of how much it will cost”, said Miller. “And then we’ll start looking at where we can get funding from.”

“The general response from the council is for us to keep up the good work. But it’s complicated – Lambeth owns this building [Carlton Mansions with the mural on one side], so we will need permission in writing.”

The restoration of the Windmill mural was funded by Heritage Lottery Fund but in order to secure that money, LMPS had to have a written promise from the owner of the building that it would remain available for the public to see for another ten years. “With the Nuclear Dawn space next to an empty car park, it is possible someone could build there and obscure the view or paint over it”, Miller explains. “We need to know that that isn’t going to happen.”

Local residents managed to get all the Brixton murals locally listed earlier this year, which means that anyone wishing to make changes to a building with a mural on it have to take this into consideration in their planning application. Ruth Miller would now like to get them nationally listed, which provides much more solid protection.

Miller is keen to ensure that the restoration has the support of those who live near the Nuclear Dawn. “I’d like to see a consultation with the local people. It’s such a big mural. We want to make sure that the people in the Barrier Block and around it don’t feel that someone is making a decision to keep something they actually might not like.” That said, she has generally had a good response from people in the area when doing her Brixton mural walks and there was lots of support for the Windmill restoration.

LMPS have created a facebook page to get support for the project and keep people updated on the campaign.

In praise of a very Brixton bookshop