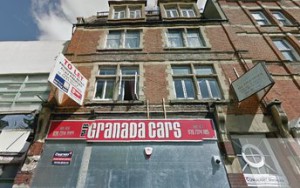 Residents will get their last chance to try to block a controversial bid to build a new restaurant in their block of flats.

Earlier this year developer Julian Pycraft submitted a planning application for a change of licence at 400-402 Coldharbour Lane so he could lease the building to Rosa’s Thai Cafe.

The site, at the bottom of Connaught Mansions, had previously been used by the mini-cab firm Granada Cars.

Residents from Connaught Mansions object to the proposal because they say that a restaurant would produce smells and noise, particularly affecting their communal roof terrace.

And their complaint is backed by councillor Matthew Parr who says a change of use to a restaurant at Connaught Mansions would cause “unacceptable” inconvenience for residents and would unbalance Coldharbour Lane in terms of numbers of restaurants (of which there are many) when compared with numbers of retail outlets.

At a planning committee hearing in March council officers recommended approval of the proposal to change the premises’ licence from a minicab office to a restaurant/cafe.

However the committee decided not to give the plan the go-ahead and chose to defer its decision after members complained that the planning officers had not adequately answered their questions.

The next planning committee hearing will be held on July 7.

In a document submitted to the planning council, residents say that the restaurant’s proposed use of ventilation system, known as Halton’s Pollustop system, would not be “sufficiently capable of dealing with odour in residential areas. As such its implementation would breach Policy 7’s stated goal of protecting residential amenity.”

The document also points out that, based on DEFRA guidelines, other councils, including Westminster and neighbouring Croydon, have “examined extensively and rejected the Halton Pollustop system” because it releases ozone.

Planning officer Jeffrey Holt said: “Officers recommended approval previously and stand by that recommendation; however, it is ultimately up to the planning committee to decide and as is always the case, including at the earlier hearing, they will have regard to the objections when they make their decision.”