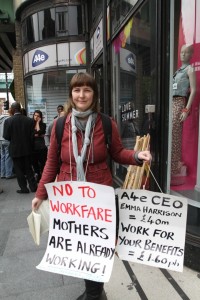 Campaigners protested in Brixton against the government’s welfare-to-work scheme yesterday, holding a ‘party’ to celebrate the end of one of the scheme’s contracts in south east England.

Welfare rights campaigners from Boycott Workfare and Unison among others gathered outside the Brixton Rd offices of A4e, a private company which runs the government scheme to get people back into work.

They brought out cake, party hats and bunting and held a party after employment minister Chris Grayling announced on Tuesday that the Mandatory Work Activity contract with A4e in south-east England would end. 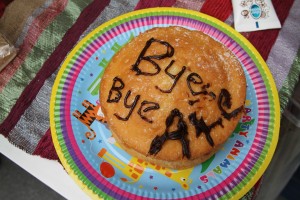 Liz Wyatt from Boycott Workfare said: “We’re here to talk to people about their rights. We’re here because we disagree with Workfare and the privatisation of welfare it represents. It’s about bullying and forcing people to work for free. With one contract down, we thought we’d have a party and celebrate.”

A4e is currently the subject of a police investigation into allegations of fraud relating to government schemes.

The welfare-to-work scheme was launched by the government in May 2010 and has come under fire for its compulsory unpaid work placement schemes, often in high street stores.