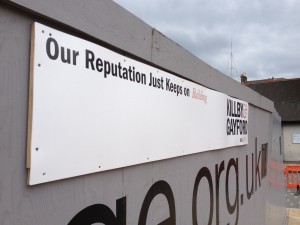 The opening of the new Black Cultural Archives centre on Windrush Square has been delayed after the building firm went into administration last month.

The Grade II-listed Raleigh Hall is being converted to house the Black Cultural Archives and was due to open in time for the Olympics.

However, Building magazine has reported that the Black Cultural Archives had to fence off the site and organise 24-hour security after Killby & Gayford, the firm carrying out the work, went into administration on April 18.
The £6.5m heritage centre is now more likely to open later in the year or even in 2013. The cost of the project, funded by Heritage Lottery and the Mayor of London among others, is also likely to increase.

The opening exhibition at the BCA has already been announced and will showcase oral histories of the Black Women’s Movement in the UK.

No borders protest marches up Brixton Hill to Brixton Prison