A man has been charged with attempted murder today after a woman was stabbed at a home in the Blenheim Gardens Estate.

Doctors with the London Air Ambulance treated a 20-year old woman for a “number of stab wounds” after an incident in Ramilles Close, Brixton Hill, at about 9.15am yesterday.

He alleged attacker, Phillip Dunkley, of Ramilles Close, was charged this afternoon and was due to appear in custody at Camberwell Magistrates Court.  Yesterday he was taken to a south London hospital after a suspected overdose.

The victim was taken to hospital by land ambulance “as a priority” after the helicopter landed next to the iconic windmill.

Police say the 20-year-old victim’s injuries are “not life threatening or life changing”.

Three ambulances and the helicopter attended the scene, as well as dozens of police officers. The air ambulance took off again at about 10.45am. Police officers stayed at the scene gathering evidence during the afternoon.

The incident unfolded just yards from the community centre where former Foreign Secretary David Miliband met with residents and the Lambeth council leader cllr Steve Reed to hear how tenants “had turned” round the Blenheim Gardens Estate. He was told by residents that violent crime had fallen in the area after tenants took on more responsibility for running it. 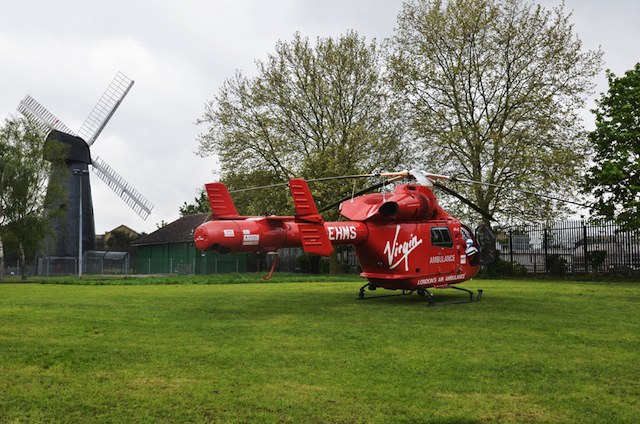 A shotgun wedding on Brixton Hill

Brixton Windmill appeal enters last week … what can you spare...