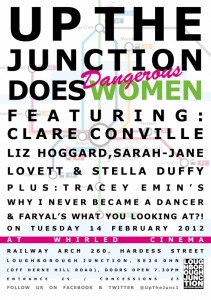 No schmalzy candlelit dinners on this site. Join the folk at the Brixton Library for a night of black erotica, celebrating National LGBT History Month. Hosted by Antoine Rogers, performers will include Dean Atta, Jocelyn Watson and Olumide Popoola.

Take Two: Up the Junction Does Dangerous Women @ Whirled Cinema

We’ve gone all literary on you, so if erotica isn’t your thing try out tales from some feisty women instead. It’s time for the Up the Junction literary salon again and tonight is a ‘Guide to Modern Life’ by “three dangerously knowledgeable women” – Clare Conville, Liz Hoggard and Sarah-Jane Lovett. Two short films complete the night – Tracey Emin’s ‘Why I Never Became a Dancer’ and a new film just shown at the London Short Film Festival called ‘What are you looking at?!’ Stella Duffy hosts as usual.

Up the Junction Does Dangerous Women at Whirled Cinema, 260 Hardess St, £5 entry, 7.30pm

The month ahead in Brixton