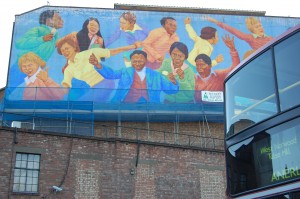 We have little doubt that this is the right time to dive headlong into our ambitious plan to create Brixton’s very own hyperlocal news website.

With news this week that the publishers of the 147-year-old South London Press have asked their editorial staff to volunteer for redundancy, the rapidly changing picture of both local and national media is clear.

As journalists, it is certainly sad to see yet more talented and passionate staff losing their jobs  at a historic organ. Sadly it’s a story we’ve all become used to.

Next month, too, councillors on the Labour-run “cooperative” Lambeth council will again take the axe to our dwindling public services. But who will hold them fully to account?

It was our aim from the outset for this website to perform the role of the now all but defunct traditional local paper. A focus point for all section of the community to come to and read, share and discuss. A voice that you can trust amid the frenetic tumult that is Brixton.

Over the last 50 years there have been at least ten different local papers covering the Brixton area, including the Brixton Advertiser, Brixton News and even the West Indian Gazette. Today, though, there is only the ailing SLP and the odd titbit in the Newsquest-owned Streatham Guardian. There is, of course, the new and popular Lambeth weekender, run by Southwark News and almost entirely funded by Lambeth council since Eric Pickles outlawed local authority “Pravda” freesheets in summer 2010.

The story behind the hype

Brixton Village, still known as Granville Arcade to many, has been feted in the London and national media for its loveliness. Indeed Herne Hill-based food critic Jay Rayner took to the Observer in October to ordain it “most exciting, radical venture on the British restaurant scene right now.”

That’s lovely. And Honest Burgers make one of the best burgers in the land, but what is the real story behind the market? How does it weave into the fabric of real Brixton Town? Leader Steve Reed has celebrated it, but the real fact is that the market’s gentrification has sent rents rocketing and excluded many who used to shop there. We will be running a series of features on the regeneration of the markets on our pages in the weeks and months to come.

For us as editors of the Brixton Blog, and driving this project, there is a fear that among all the chi chi regeneration, and influx of (mainly white) wealthy, middle class professionals the real community of Brixton will be forgotten. A genuine risk that those who have lived here for decades could be driven away by hipsters sipping caramel lattes and sending private rents into orbit.

But many of Brixton’s newest immigrants, as well as its oldest, are embracing the idea of localism.  This is proved time after time by schemes like Project Dirt, the Brockwell Park Greenhouse Project and Brixton People’s Kitchen. And dozens more besides. Let’s use this energy, coordinate it, and make it penetrate and benefit the lives of each of the 65,000 men, women and children that live here

As it is precisely what we’re about, standing up for the community is one of our most cherished aims.

As far as making the project work, we have put in a lot of thought, and spoken to the experts, like Damian Radcliffe, hyperlocal media expert at Ofcom. Damian gave us some invaluable advice that, crucially, wasn’t “don’t do it”. We’ve also spoken to the editors of a number of other hyperlocal blogs and commercial websites. While a few raised their eyebrows, not one said it was a bad idea.

To survive, though, we will need the support of our readers within the Brixton Community. We shall be looking at commercial partnerships with ethical local business, and we may experiment with asking for donations to keep the project alive. While this is all new territory, we hope we can blaze a trail for other hyperlocal media to follow, and that the Brixton community will support a website that they feel they own.

Just like the Brixton that we love, news and access to information is changing radically but, in the modern context of savage public spending cuts, rioting and unrest the Brixton Blog will be at the forefront of a journalistic revolution.

This is our first statement, so comments are disabled on this piece but we’d love to hear your thoughts – email info@brixtonblog.com

Home From Home: The Commercial