Big congratulations to the activists who protested against TfL’s delay in fixing the lift at Brixton Station – eight months after the lift first broke, it’s finally been fixed and wheelchair users, parents with buggys and mobility scooter users can get into the station again.

Campaign group Transport for All first complained to Transport for London in May 2010 after the lift had been put out of order due to water leakage. TfL promised it would be fixed by August, but it took another four months to make that a reality. Activists were especially aggrieved by the lack of any signage at street level about the lift closure, and the fact that announcements were still being made on trains that ‘Step-free access is available at Brixton station’. TfL did eventually put up information about the lift closure just hours after Transport for All, together with London Assembly member Val Shawcross, protested outside the station. 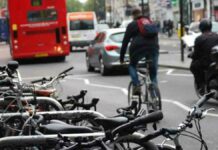