There have been some wonderful May-like days this week, but it’s September, it’s now freezing cold and it’s getting darker earlier every night – yes, the summer is truly over, so here are some photos in memory of it:

The summer starts with flights grounded because of the volcanic ash and Brixton got perfect, plane-less blue skies:

The Lido went from being empty…

to being very full…

Some poor people had exams in the Recreation Centre:

England put on some poor performances at The Ritzy:

There were street parties – this one’s on Endymion Rd:

And we got to give our opinion on the co-op council by putting plastic balls in red buckets:

Flowers, and especially roses, bloomed all over Brixton:

And the foxes came out to play:

We had what has been named by some “the best Lambeth Country Show ever”: There was a jerk chicken cook-off:

And the star of the summer was…Brockwell Park: 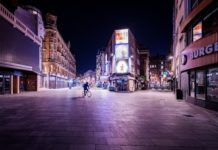 Lambeth Country Show 2015: all set for the Festival of Love