On a freezing day in Brixton earlier this month, four women could be found performing an absurdist dance inside a market shop to bemused passers-by. The dance was charming. They made themselves look stupid, squashing their faces against the smudged window and then jumping back with their hands up to their chests in scared-bunny-rabbit impressions. One of them could barely keep a straight face.

They were a performance act at the Space Station gallery, part of a pop-up shop project in Brixton Village.  The Granville Arcade is going through troubled times, but its empty shops are now occupied by pop-up projects designed to breathe new life into the market. In October 2009, a group called the Spacemakers Agency reached an agreement with Lambeth Council and the owners of the market, the London & Associated Properties PLC (LAP), for the rent-free occupancy of twenty shops in Brixton Village for three months. The Spacemakers Agency put out a call for creative and community-friendly proposals for the first wave of projects in December. Now the second wave has brought new events, shops, galleries and performances.

Okido, the Brixton-based children’s comic, have set up their own space. Next door is Herd, a design space set up by a young architect, and the nearby Sweet Tooth is selling old-fashioned sweets.  The artinivan art collective created a life-size ‘Camera Obscurer’ in the opening week – it was a fun diversion, although pretty obscure in itself. Even the acclaimed supper club, the Underground Restaurant, came down from Kilburn on Saturday 16th to cook for 80 people in an old fabric shop. Ms Marmite Lover, the Underground Restaurant founder, said, “I think the idea of pop-up shops is fantastic. Why have an empty space, when you can use it temporarily for exciting projects?”

Well, a fun diversion is all very well, but will Spacemakers’ project actually bring long-term positive change to Brixton Village?The pop-up shops are imaginative, but we should also be worrying that the poorest residents in Brixton aren’t benefiting from this ‘regeneration’ and that those who espouse the virtues of  ‘community-initiatives’ come from, and draw to them, the young middle classes, not the whole community.

I am impressed, however, by Dougald Hine, the founder of Spacemakers who puts forward some genuinly convincing arguments about the long-term effects of the short-term shops. “We want to make this a place where people want to rent shops, because the LAP were struggling to find tenants.”  Several temporary tenants, such as Cornercopia, are actually looking to become permanent residents of the market. “At the same time, we’re finding that other people  have been attracted by fact that there’s now a real sense of energy here and are starting to go to the owners wanting to rent”. A vintage clothes shop, Rejuvenation (pictured below), opened yesterday as a permanent tenant.

The market traders haven’t been directly involved in the project, but they could benefit from more visitors and a supply chain that remains within the market.  Cornercopia sell chutneys made from market ingredients. Hine is keen for it not to “become an us and them thing”.Relations between LAP and market traders have been tricky of late, but the Spacemaker involvement has, says Hine, opened up new avenues for discussion. One trader, Tirence Randall of the Los Andes Butchers, was optimistic. “It’s something different that brightens the market up. I hope it does catch on and bring a lot more people down.” Like the Brixton pound, this is a bit of a ‘wait-and-see’ moment, but I’m erring on the positive side. As long as it doesn’t mean an invasion of East London trendies… 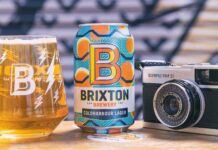