The winner of the people’s poll for the 2022 Brixton Blog & Bugle summer art show is Loretta Yussuff.

Her oil on canvas work Portrait of Younger Brother narrowly topped the votes cast by hundreds of people, but the entries were so good and voting so close, that three other artists were awarded runners-up prizes at the award ceremony last night (26 July).

They are Julie Bennett, with Basquiat (Yellow); Benedict Flanagan, with My Village on Electric Avenue; and Mark McLaughlin, who could not be at the ceremony, with Late afternoon in March, Brockwell Park.

Opening the ceremony at the exhibition in Brixton library, Blog & Bugle arts editor Leslie Manasseh, who organised the show, said everybody was saying that it was the best yet.

The first show four years ago had 50 works entered by 27 artists. “Today more than 80 artists entered over 150 works from which we selected the show,” he said.

It was an enormously diverse show. “We have perfectly rendered landscapes alongside very bold abstract political statements.
“I think this reflects the essence of Brixton. This is actually a tribute to Brixton. Let’s not forget that everybody in the show lives no further than 10 minutes away from this building.
“It’s an extraordinary concentration of talent.”

The people’s vote had become an essential part, and also one of the most successful elements, of the show.
“And that’s not only because democracy is a good thing – although obviously it is – and it’s not only because people like being consulted – although they do – but it’s because it changes the way people engage with the show and the work, because they’re not just passive spectators.

“They become people who choose, who compare, who decide, who select, who chat and argue. It becomes a much more active process of engagement.

“I watched a man the other day who spent 35 minutes going round, really carefully looking at every single piece of work. It was great to watch. It’s exactly what we want to achieve. It’s bringing local artists closer to the local community.
Leslie thanked Rosella Black and Anthony Steel from Brixton library, Jimmy Davidson from Brockwell Art Services who donated a £250 framing voucher as a prize – dedicated to local artist Colin Failes who died last year.

He also thanked Binki Taylor of the Brixton Project who, along with him and Rosella, made up the selection panel for the show, and Tim Gledstone of Squire and Partners architects, whose model-making department once again provided the unique – and playable – Bugle trophy for the winner.

Tim Gledstone, who awarded the prizes, said it was an amazing show with an incredible quality of work.

Loretta Yussuff began painting two and a half years ago, after drawing for three years before that. 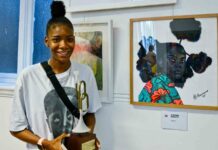 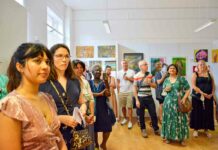 Four in a row and Dulwich stay second