Local climate campaigners plan to rally in Windrush Square tomorrow (17 March) “to remind Lambeth council of the climate emergency they declared in 2019”.

Lambeth Extinction Rebellion (XR) will join other local campaign groups at the rally.

“The Citizens’ Assembly they set up made some recommendations last autumn, but we are still waiting for the promised “Climate Action Plan”, which was supposed to be released at the end of 2021.

“Meanwhile expert comparison of councils’ climate actions has given Lambeth only a 37% rating!”

XR said the rally is designed to put pressure on the council on climate-related issues “including housing, air pollution, transport, waste and workers’ rights” and to build awareness about what’s happening in the borough and beyond and momentum to do something about it.

The council has announced the online launch of its climate action plan on Wednesday 23 March.

It said residents, community groups and businesses across the borough have been involved in developing the plan – from members of the Citizens’ Assembly to large institutions and employers.

Council leader Claire Holland and “key stakeholders involved in the development of the plan” will speak. 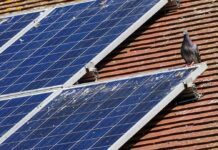 Even my children loved it!