On 10 April 1981, the streets of Brixton became the heart of an Uprising. Much has been said and written by the commentariat, politicians and academics about the events of that day.

Now you can hear from the people who were there.

On These Streets is a free, interactive audio experience by non zero one and Brixton House that invites you to witness, interact, and respond to the voices, stories, and legacy of that one day. The guide is part of the overall 81 Acts of Exuberant Defiance project to mark the Uprising.

Writer Somalia Nonyé Seaton and sound artist Xana have woven fiction with verbatim testimony, all set within an audio world of dub music.

As you follow a route through Brixton, you listen to four individuals; their experiences of the day, the lessons they drew, and the anger they cannot hide.

Paula provides a rather gentle introduction to Brixton and its past. But as she encourages you to take in the sounds, sights, history and culture of Brixton which exist in the people on the streets, Paula develops a more angry voice as she recalls the racism of the 1980s.

She takes you back to her childhood in Solon Road from where she witnessed the events of 10 April 1981. Even as a child she was aware of the tension between the community and the police and brings to life what to was like to walk along streets full of smoke and broken glass. 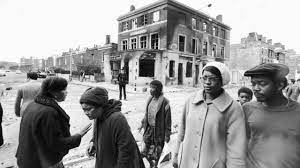 Baden talks about the “beating heart and energy” of Brixton as he recalls the frontline – as Railton Road was better known at the time – and the George Canning Pub (now Hootananny) which epitomised the very diverse and inclusive Brixton culture of the 1980s.

On 10 April a stranger shouting “Brixton on fire” ran into the pub with the shocking message that took the people out of the building and into the centre of Brixton.

He recalls the rage and frustration from “years of built up pain” which spilled over into violence on the streets with regret and shock. And he brings to life how people were trying to cope with the reality of the uprising – including some surreal moments. 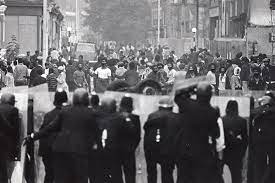 Uncle offers an angry and uncompromising voice as he locates the events of 10 April 1981 in the history of colonialism and racism which oppress, corrupt and deprive Black communities.

Specifically he cites the New Cross fire which killed 13 young black people and heavy-handed policing in Brixton as triggers for the uprising. The community was simply fighting back.

In a similar vein, Aunty reflects on the different generations of Black people and the struggle for identity and survival. And how the inter-generational collective trauma of racism turned communities into tinder boxes – “hot with rage”. For her, this was part of a revolution.

The events of 10 April 1981 are part of Brixton’s history. Listen to the people how were there to understand better how it came about, how it felt and what it meant.

On These Streets takes place on the streets of Brixton. It’s an audio experience that you stream directly from your phone or device (iPhone, Android, tablet, notepad, Chromebook etc) as you walk around Brixton.

It takes around an hour and a half to complete and it is recommended that you use headphones for the best experience.

It’s free to take part but you will need to book in advance. You will receive an email with the link and instructions for On These Streets a couple of days before your performance date. You won’t need to download or install any software, just bring a smart device with web access (you may be charged for data use if it isn’t included in your mobile plan.) You can take part any time between 10am and 10pm on your chosen day.

If you don’t have a smart device, on certain days you will be able to borrow one. See here for further details.