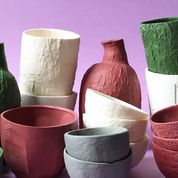 Inedible Harvest by Natural Selection is an exhibition at the San Mei gallery where the process of creating the work is as interesting as the pieces on show. These are handmade vessels based on moulds which are cast from oddly shaped fruit and vegetables – of a type which would have been rejected by supermarkets as imperfect. So each piece is rooted in the politics and culture of food production and consumption, with more than a nod in the direction of sustainability and environmentalism. Discarded objects have been turned into often quite lovely small ceramic pieces – some pure white, others earth colours – but all celebrating both form and function, and showcasing a wide variety of clay bodies and glaze techniques, from fine Chinese porcelain wares to terracotta and black glazes, to raku-fired stoneware clays.

Both the moulds and the vessels are on show and you can handle the pieces. This is a clever way of bringing you closer to the interplay between the aesthetic and the cultural and enables you to trace the creative process.

The exhibition opens on July 21st and runs through to August 10th with a programme of workshops, talks, collaborations and partnerships which aim to raise questions about contemporary food culture and its implications in a varied, critical and enjoyable way.

The San Mei Gallery is at 39a Loughborough Road, SW9 7TB and is open Wednesday – Sunday from 12 to 6pm. For further information go to www.sanmeigallery.co.uk

It’s not too late to emulate Lido icebreakers and raise cash...