Forty years ago this month, Bob Marley and the Wailers performed their largest UK concert in South London as part of the 1980 “Uprising” tour. 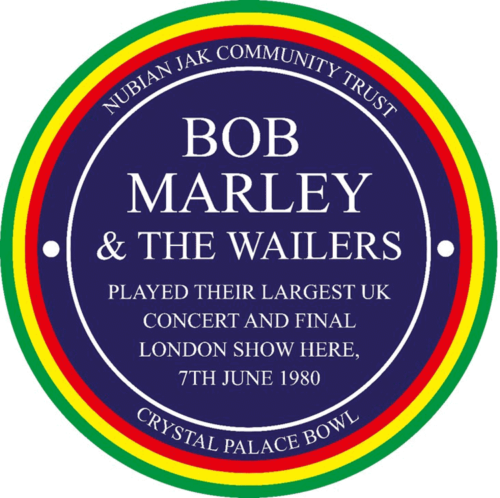 Now campaigners are fundraising for a unique plaque to mark the Crystal Palace Bowl event, which was Marley’s last London appearance and also saw the first public live performance of his great work Redemption Song in the UK.

Campaign organisers are also looking for people who were there, and have already tracked down a lot of previously unseen images of the concert.

Now they a putting out a call for anyone who was lucky enough to be there, to share memories, recollections, photos, bootlegs and fan footage. They will be compiled into a short documentary film that is being worked on for later in the year.

Bob Marley would have been 75 this year.

Among the organisers of the campaign is Dr Jak Beula of the Nubian Jak Community Trust (NJCT), who was instrumental in bringing the African Caribbean War and Peace Memorial to Brixton’s Windrush Square.

“Having once shared the same manager in Don Taylor, the Crystal Palace plaque is of particular importance to me,” Jak Beaula said.

“On behalf of the trustees of the Nubian Jak Community Trust, we fully support commemorating the last and largest musical appearance in London of Bob Marley and the Wailers.

“Installing a 40th-anniversary plaque at the Crystal Palace Bowl would be the perfect continuation of our previous commemorations celebrating the life and work of legendary music icon and band.”

The Marley memorial plaque’s design is unique and will be ringed with the red, gold and green colours of reggae and the Ethiopian/Pan-African flag.

The plan is to have an unveiling ceremony in the park in October this year to coincide with Black History Month.

Other project partners include the Friends of Crystal Palace Park and supporters include Island Records and Bromley council.

Louis Bloom, president Island Records, said: “To have this giant of music and culture, honoured in this way, will help to inspire future generations and keep his message of love, hope, activism and spirituality alive.”

The crowdfunder needs to raise £2,700 and is already well on the way to its target,

Friends of Crystal Palace Park said that over the past decade Crystal Palace Bowl had been allowed to fall into a state of disrepair. The community-based group was set up in 2018 to push for its repair, re-use and revival.