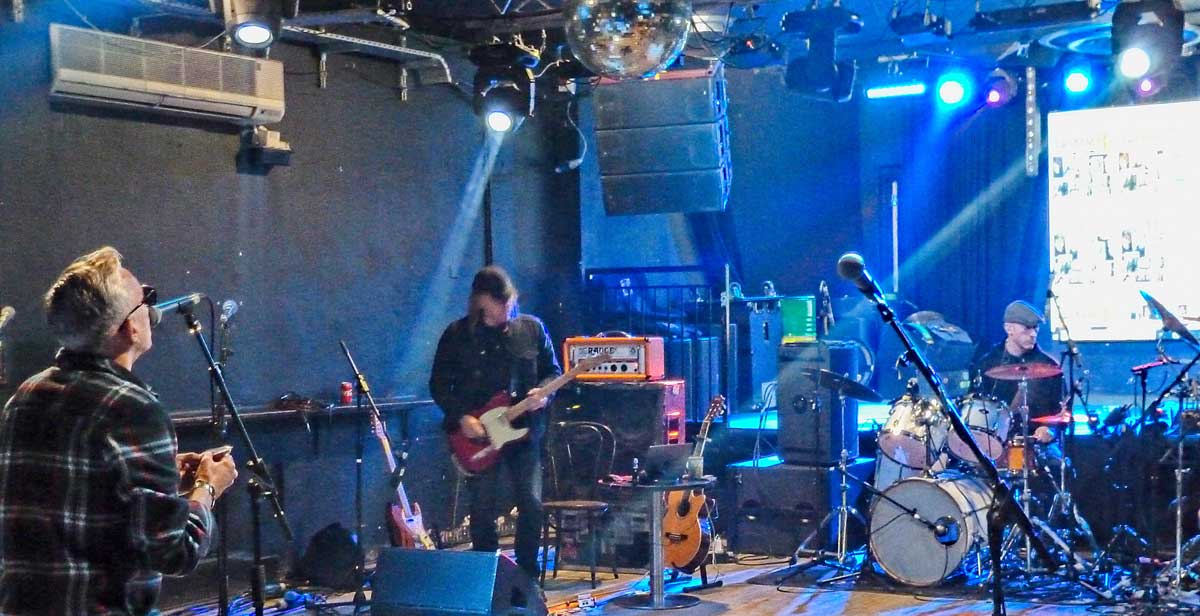 Brixton legends Alabama 3 will be performing their hugely successful debut album Exile On Coldharbour Lane in full on a UK tour ending at the Brixton Academy on Saturday 21 December.

It’s been a difficult year for the band with the death of co-founder Jake Black (AKA The Very Reverend D.Wayne Love) back in May, but they remain steadfast in their mission to bring deliverance to mayhem makers, misfits and the mashed-up with their unique brand of country-acid-house music.

I’ve been invited to drop into rehearsals which are taking place at JAMM on the Brixton Road. Instruments, monitors and cables sprawl across the dance-floor as the band check the sound with a few bars of Mao Tse Tung Said. With levels sorted, frontman Rob Spragg (AKA Larry Love) leads me to the next room for a chat.

For all the southern drawl, pedal steel and mythical Americana, Exile On Coldharbour Lane owes as much to Primal Scream or perhaps Happy Mondays as it does Hank Williams.

It offers up salvation with such intoxicated swagger you can almost taste the bourbon and spliff. The band’s big break came when the song Woke Up This Morning was chosen as the title music for the hit American TV show The Sopranos. It was subsequently sampled by one of the greatest rappers of all time, Nas, for his tune Got Ur Self a Gun.

I ask Rob why the band decided to pay tribute to Brixton in the album’s title. “It’s so much about Brixton culture at that time, which was very much dominated by all-night Irish bars and Jamaican domino sessions.

“Bradys back then (now chain restaurant Wahaca) was great – you’d have all the old Jamaican fellows playing dominoes in the front room, in the back room you’d have all the Irish boys singing rebel songs and the bar would be open all night long. That melting pot … that cultural diversity … Brixton was a place where Alabama 3 could invent themselves.”

Rob seems warm and relaxed and has rockstar charisma and a deeply resonant speaking voice – qualities he may well have inherited from his Mormon preacher father.

By the age of 21 he’d been excommunicated by his family having exchanged a religious life in the valleys of South Wales for Brixton and rock & roll – or, as he puts it, “one church for another”.

“I sold my soul at the crossroads at Loughborough Junction” he says with a wry smile.

“Talking of Brixton, I’ll tell you what was really edifying … Recently I was walking around feeling sad missing Jake, and I walked down from Stockwell and I come to the skate park – my boy goes in there sometimes – and I looked over and there’s a f**king mural to Jake Black in the skate park! And that for me is the love that Brixton shows. I dunno who did it – love from the streets – that’s the best accolade we could have. As for the Academy gig, all our fans are going to cry and laugh. I want us all to cry together and to laugh together as a community, as a church. I can’t think of a better way of honouring our brother Jake.”

I ask him whether he would still be happy to be exiled on Coldharbour Lane given how much has changed since the album’s release. “Unfortunately Brixton has gone the way of many successful ghettos, but gentrification is going to happen. There’s no point beating ourselves up saying that we’re losing culture – culture is always about fighting back – there’s always resistance.”

His thoughts seem to turn to the state of the world as a whole as he continues, “I wish we were living in a socialist utopia, but given the fact we’re not, I think as writers, artists, painters, poets, actors, musicians, it’s a wonderful time to be alive, because what the world needs now is good f**king art and culture. It’s one thing demagogues and dictators can’t cripple – they can’t stop us dancing.”