Led by Matthew O’Keefe, founder of the Brixton Chamber Orchestra and Lunchbreak Opera, the three-week festival takes in half-term and is designed to peak children’s curiosity about poetry, theatre, art, literature, music and filmmaking.

Local talent will also be represented at this year’s festival and aspiring artists will have the chance to exhibit paintings, ceramics, photography and sculptures.

The theme of this year’s festival will be “My London”, with plenty of activities for children. Filmmakers Lemon Wedge will provide a filmmaking session, Shakespeare Unwrapped will help kids conquer the language of Shakespeare, and Morley College will allow them to get to grips with arts and crafts.

Visitors will be able to immerse themselves in the performances of classical music group Musica Antica Rotherhithe, who have achieved great success with 17th century opera, and other musical talents including soprano Camilla Seale and a performance by Lunchbreak Opera of Puccini’s lesser known opera Gianni Schicchi.

St Michael’s Arts Festival has brought large scale classical repertory to the borough over the last three years and has been instrumental in supporting the Brixton Chamber Orchestra (BCO). The BCO specialises in classical music but also plays pop, gospel and grime.

The festival starts on Thursday 3 October and runs until the 20th. It is sponsored by Ludlowthompson and supported by Waterstone Books. The festival takes place in St Michael’s Church on Stockwell Park SW9 0DA. Tickets for families, adults and children are available at http://bit.ly/St-Michael-Arts-Festival.

Organisers say: “The Festival launches with the Echea Quartet, who are fast being recognised as major talents in the classical music world, winning awards and recognition, and we have also enlisted the help of Stockwell local William Bennett to coach BCO through the Reinecke Flute Concerto, performed by his star pupil Alena Walentin.

“Our Artistic Director, Matthew O’Keeffe, will also be leading the BCO in supporting a performance of Puccini’s ingenious comedy in one act, Gianni Schicchi, performed by Lunch Time Opera on Saturday 5th October.  Lunch Time Opera was founded by Matthew himself.

There’s a jazz evening on Friday 18 October, featuring a house band of South London all-stars, including Steve Lodder, Ed Babar and Flávio Li Vigni.  Flavio is also the Director of Jazz at Morley College, who will be curating the Festival’s art exhibition.

For tickets and information, please do go to www.Stmaf.org 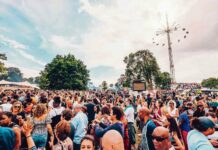