To commemorate 50 years since the formation of the Dark & Light theatre company, a blue heritage plaque will be installed on Longfield Hall by the Nubian Jak Community Trust. The ceremony will take place on Sunday 27 October at 2pm.

The Dark and Light Theatre company, later called the Black Theatre of Brixton, was founded by Jamaican actor and administrator Frank Cousins. Under his artistic direction between 1969 and 1975, Dark & Light staged many productions at Longfield Hall. It was the first black theatre company in the UK.

Dr Jak Beula CEO of the Nubian Jak Community Trust, said: “Frank was a true visionary. An actor who talked the talk, then put his money and considerable talents where his mouth was, and walked the walk. I am so pleased he will witness his pioneering contribution to British theatre immortalised with a blue plaque in his lifetime.”

Many celebrities and past performers will attend, including Frank Cousins who will unveil the plaque. A reception will follow including refreshments, an exhibition and a mini medley performance of some of Dark & Light’s best-known productions, featuring current actors that use the building. 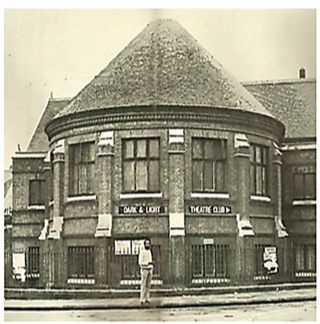 Franck Cousins said, “The Dark and Light was bound to happen. But how? Finding Longfield Hall was the beginning. Without premises you have nothing”.

This year the Longfield Hall Trust received funding from the National Lottery Heritage Fund for a project exploring the history of Dark & Light Theatre. This includes conducting interviews with DLT associates and digitising archive material to create a web resource. The Trust are also running drama workshops for adults and young people. The workshops culminate in a performance telling DLT’s story on Friday 25 October at 7pm

Longfield Hall provides a space for the community to engage in arts, wellbeing and fitness activities.

Catherine Hamilton, charity development manager, LHT, said: “Longfield Hall Trust is proud and excited to see a permanent acknowledgement in place at Longfield Hall to celebrate the achievements of the trailblazing Dark and Light Theatre company. We’ve been working for a while to develop a community engagement project to celebrate their story.

“It’s therefore fitting that in 2019, 50 years after Frank Cousins founded DLT, we have a permanent reminder of their presence here at the hall. Our National Lottery Heritage funded workshops for adults and young people will also bring the company’s story alive during Black History Month, widening access to the history of this significant black-led organisation for our community.

The plaque commemorating the Light and Dark Theatre company will be the 49th plaque that the Nubian Jak Community Trust has unveiled.

The organisation was also responsible for producing Britain’s first and only national memorial to African and Caribbean service personnel who served in both World Wars. The memorial based in Windrush Square will be the venue for the third national Remembrance Sunday commemoration on Windrush Square on 10th November 1pm.

Date fixed for memorial to recognise Black servicemen and women