Closure of one lane to traffic and the footpath on one side of Atlantic Road looks set to continue. Despite notices attached to the scaffolding causing the obstruction saying that the works were due to end on 31 August, there was no sign of any changes as the Brixton Bugle went to press on 29 August.

Planning permission for Network Rail to refurbish the Atlantic Road arches was granted more than three years ago. Network Rail told Lambeth council then that it would take 12 months. When work did not begin immediately, Network Rail said that one of the reasons was the need to inspect the arches for safety reasons and to protect passengers on trains running over them.

A Network Rail spokesperson recently told the Bugle: “We are finalising the survey works to identify the extent of structural issues with the station platform overhang at Brixton station.

“We will be working on a solution to enable safe prolonged use of the platform and removal of the emergency propping currently in place so retail units are not obstructed.

“Although the extent of the remedial works is unknown at present, we are working with designers, consultants and Arch Co [which bought most of Network Rail’s arches, including those below the platform, in 2018] to enable a more rapid and permanent solution without compromising safety. 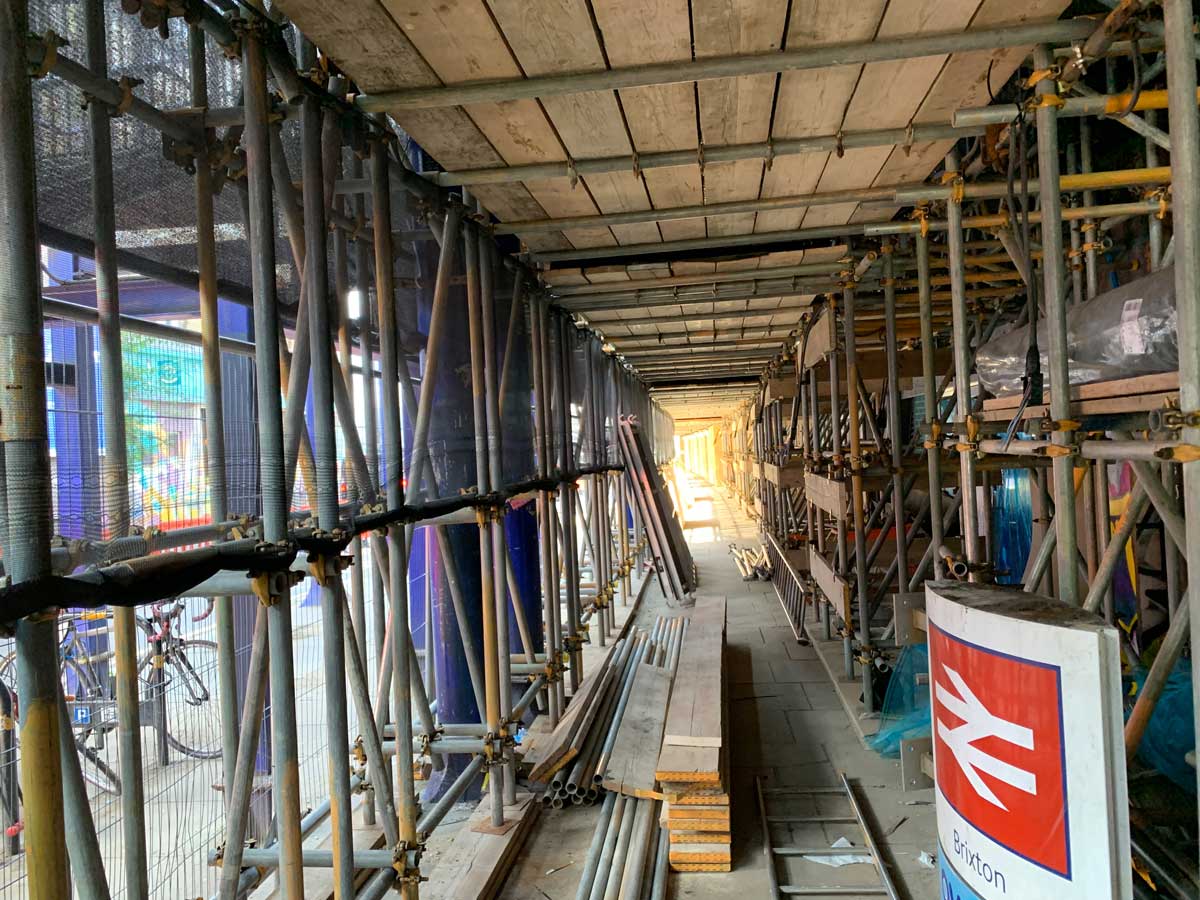 “We’re sorry emergency works have impacted on local businesses. Safety has to come first on issues like this, but we are working with local businesses to keep them informed. Keeping people safe on and around the railway is at the heart of everything we do and will always be considered alongside the needs of the local community.”

As long ago as January 2017 local traders were warning that work on the arches had put a blight on the prospects of what had been a busy shopping area.

In November 2016 then Lambeth council leader Lib Peck demanded a meeting with the chairman of Network Rail over the failure to start work on the arches, despite the council’s planning sub-committee having approved it on 2 August 2016.

A Network Rail spokesperson said at the time: “We have always been clear that the proposed redevelopment scheme would be completed within 12 months of our having vacant possession of all of the arch units” and blamed the delay on four of its tenants who had launched a legal challenge to their eviction.

The Network Rail spokesperson said that, while this would affect the timescale for completion of the overall scheme, “we are progressing with enabling and other necessary works to the vacant arches in order to remain as close as possible to our works timetable.”

The spokesperson said that “the units under the arches are in poor condition and we also have to inspect the arches themselves for safety reasons, and to protect the many thousands of passengers whose trains run over them every day.”

Some local business people fear that delays to the final reopening of the arches may still be a matter of years away rather than months away.

From Brixton’s Ebony Horse Club to Goodwood – Khadijah rides her...